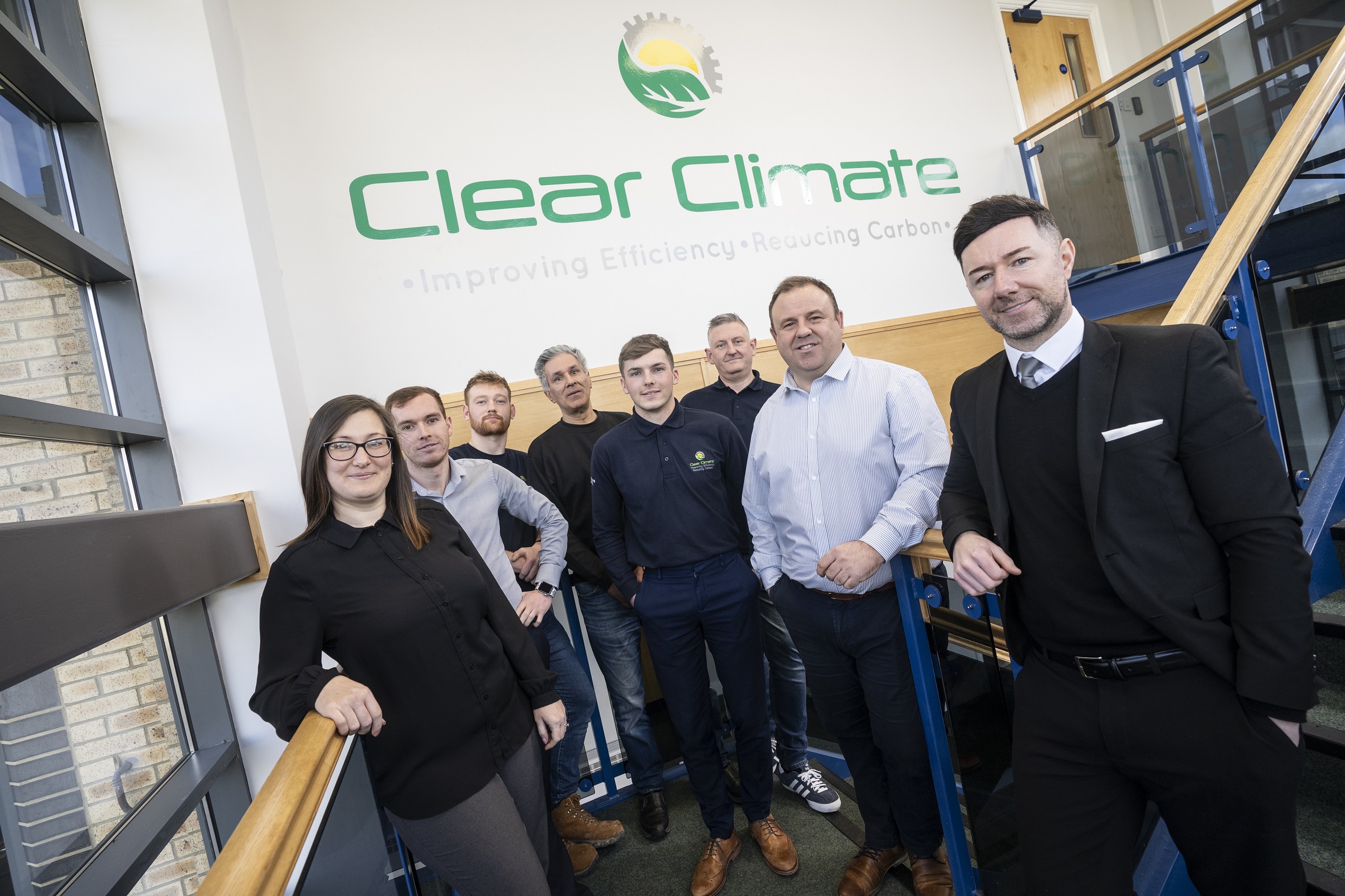 Clear Climate are just five years into their business journey yet are already targeting turnover in excess of £10m. Not only that, but in a relatively short space of time they have already established themselves as the region’s leading provider of renewable energy solutions.

Race to Zero. Carbon Footprint. Green Energy. Energy Efficiency. Just some of the buzz words and phrases we seem to be hearing on a daily basis at the moment. But why?

What does it mean to people and businesses, and, more importantly, why should we care? Lee Peachey, co-founder and director of Peterlee-based renewable energy specialist Clear Climate, said: “We all have an obligation to do our bit to protect the environment for future generations.

“The signs are already there – if we don’t act now the damage to our planet will be irreversible. We’ve got to make big changes, whether that’s at home, when we’re outdoors or when we come to work, and the Government has put in place robust targets as part of the Race to Zero drive that we’re hearing so much about. And that means businesses like ours are seeing a significant increase in demand for their services, both from the commercial and residential markets.”

This rise in demand certainly explains why in just five years, Clear Climate’s growth has been far beyond anything that Lee and his fellow director Andy Smith could have envisaged – although there’s no denying they are two incredibly switched on businessmen with huge ambition.

From launching in 2017, Clear Climate has established itself as the region’s leading provider of renewable energy solutions, winning lucrative, multi-million pound contracts with commercial property developers, housing associations and local authorities across the North East.

The business now employs 12 office staff and around 60 engineers and in its most recent financial year recorded turnover in excess of £4m. So how did the business come about?

Lee said: “I first crossed paths with Andy back at sixth form college, when we both played football. At the time I’d been on Hartlepool United’s books, but after being released I went back to college, however as I was going back Andy was on his way out and into work. What we didn’t realise until years later was that my friends were also Andy’s friends. After college I started training as an engineer and was offered a job which was very well paid, but then an opportunity came up at a design company in Durham, and that was a game changer for me. It was either take the higher paid job which would have meant a lifetime on the tools, or start again with the design company, on what was my third apprenticeship, which would give me a career much better prospects and the opportunity to gain an Engineering Degree. So that’s what I did, I started from scratch and never looked back.

“At the same time, Andy was establishing himself working for the flagship air conditioning company in the North East. Although he was keen to learn all aspects of the engineering process, it was very quickly that he found a special talent in the operations-driven projects.”

After cutting his teeth Andy was offered an opportunity to set up an air conditioning department for a local refrigeration company which he gained directorship and single handily created a great new department.

Andy said: “Although I was happy with the sector I had created for the business I always knew I wanted to be a part of my own company and business.

“In 2017 our paths crossed again and we sat down for a coffee and firstly realised how many friends in common we had, and then talking about our careers there were so many similarities. We were each the missing piece for the other in terms of starting a business and when we got talking we knew setting up together was meant to be.”

In June 2017 Clear Climate was officially launched.Initially focussed on the air conditioning market, Lee and Andy spent the early days of the business knocking on doors, trying to draw on their vast network of contacts to bring in work.

But it wasn’t easy as Andy explains: “We did find it a challenge at first as we were the new boys in town, and small in comparison to some of the big hitters in the market at that time. From the June to the Christmas it was tough going and we struggled to find work. We had drawn up a target list of the companies we wanted to work with and we focussed on approaching them to see if we could pick up any contracts.

“Then, after Christmas, in the January of 2018, we won a couple of projects and they proved to be the domino effect. These contracts led to others coming in and we’ve never looked back since. Knocking on doors had finally paid off and within three years, we’d secured at least one piece of work from every company on our target list.”

Clear Climate’s growth within the air conditioning market was vast and within two years turnover had passed the £2m mark.

But not ones to sit back and settle for their early success, Lee and Andy decided to diversify their business, and knew with the Government’s ambitious Race to Zero drive, there was a massive gap in the renewables market for Heat Pumps, PV and Battery Storage. The move has been pivotal for the business, which is now located within a modern office at Fern Court at Bracken Hill Business Park in Peterlee, with the target of £10m turnover now firmly in their sights.

Lee added: “Our growth within the air source heat pump market will be significant over the coming months as both the public and private sector make the switch from the traditional boilers found in many properties to the more environmentally friendly and economically sustainable air source heat pumps. The challenge we face is enormous as we work towards the Net Zero 2050 challenge, and we all have a responsibility to do what we can – something we’re at long last realising. For us as a leading business within the fast-growing renewables sector, it presents a huge opportunity and that’s something we’ve started planning for, to ensure we’re ideally placed to meet the demand for air source heat pump installations.”

And that demand is significant, as is the challenge to get from where we are now to where the Government wants to be.

Currently, around 80,000 air source heat pump systems are being installed – the challenge is to get that number to 1.1m by 2030. Is that possible?

Lee added: “It’s a very difficult question as there are so many factors to consider. Firstly, there simply aren’t enough engineers, parts, materials or equipment currently out there so the scale up of our sector is massive and a challenge I don’t recall other sectors having to achieve in such a small time frame, in such a new technology. That being said, all at Clear Climate are certainly up for the challenge and as the leading company in the North East will certainly do our best to lead by example.

“Secondly, there’s a massive skills shortage within the market, which we’re working to try and address, however, it will take huge leaps to get to where the Government wants us to be. For us, though, it’s massive – in the early days we were proactively trying to secure work; now construction companies, housing providers and local authorities are coming to us. We’re no longer the new boys, we’re a big hitter in the renewable energy market, and that puts us in a great position to continue to grow.”

Within their facility in Peterlee, Clear Climate has welcomed the new Go Green Training Academy, which will deliver qualifications in the installation, servicing and maintenance of Air Source Heat Pumps (ASHPs), helping trades people in the area take advantage of growing demand for low carbon, cost-effective heating.

Go Green Training is the first heat pump training centre in the North East and has hosted a number of sessions with local authorities and colleges in the region.

Clear Climate also provides PV, batteries and external wall insulation services, all of which enable residential and commercial properties to run more energy efficiently. With a fast-growing portfolio of contracts across the region, the challenge for Clear Climate will be ensuring it has the right people on board to meet demand.

Andy said: “That’s why we’ve created the training academy on site, which puts us in the perfect position to be able to recruit the engineers we need to support our growth, knowing that because they’ve been trained by us, they’re working to our exacting standards. We’ve also invested in our on-site facilities, including the creation of a chill-out room which has a pool table, table football, a table tennis table, a TV and comfy sofas for the staff to enjoy. We want to be an employer of choice, somewhere the best people want to work, and that means creating a relaxed environment where staff are happy and motivated. We want to attract the best people, of course, but more importantly we want to keep them.”

You certainly have to admire what Lee, Andy and the Clear Climate team has achieved in a relatively short space of time.

“We want to be the driving force and the renewable pioneers of our area.” Lee tells me. I think they’re well on their way!