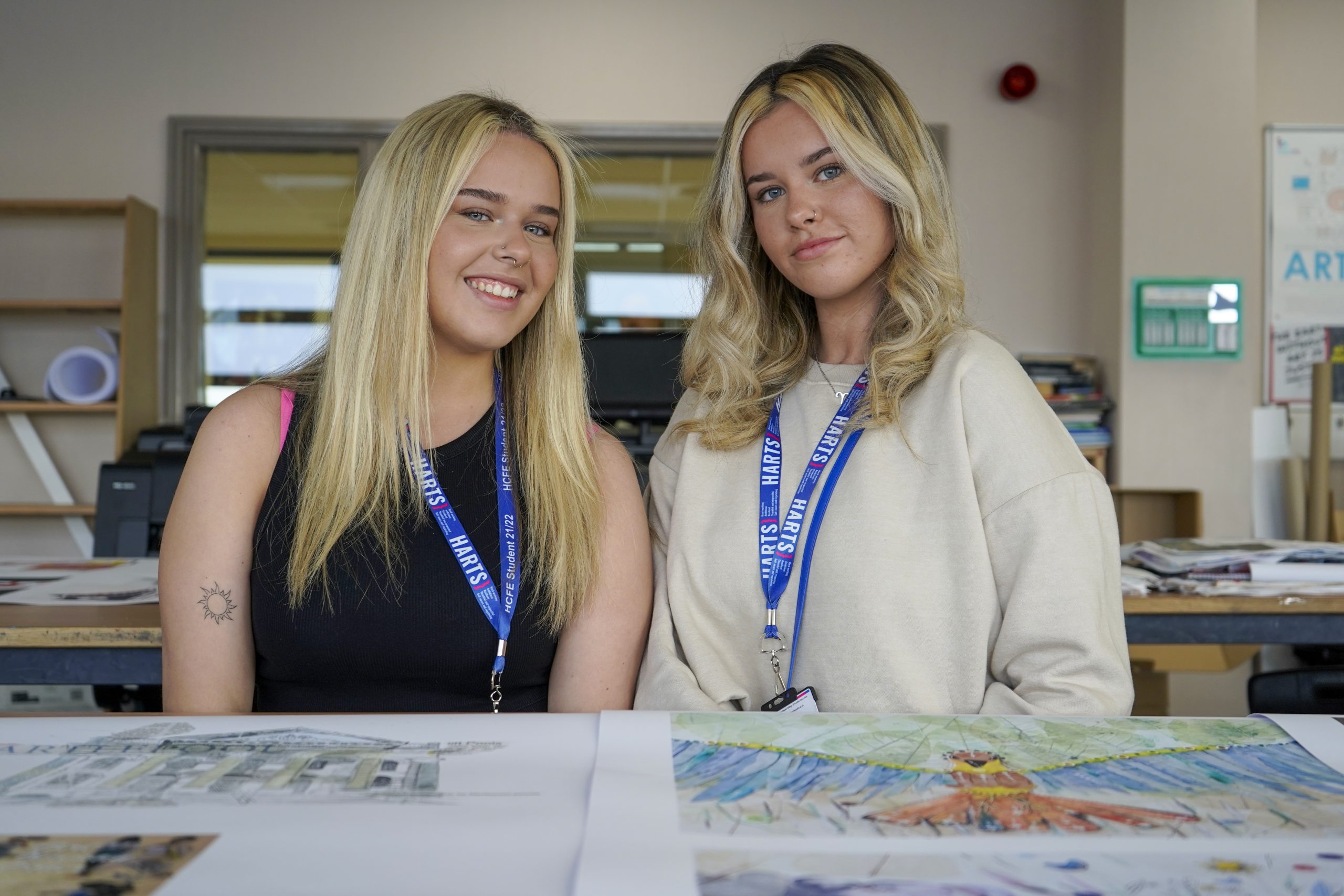 Two art and design students from Hartlepool College of Further Education will continue a strong friendship at university – and it is unlikely to stop there.

Eighteen-year-olds Tayler Milburn and Hannah Scanlon have received conditional offers from Northumbria University and they have already lined up accommodation in the same halls of residence.

Even though Tayler and Hannah will be studying different things, the pair have already discussed a plan that might see them end up working in tandem further down the line.

Tayler said: “I always remember during lockdown how we used to go on bike rides all the time. We always talked about me being an interior designer and Hannah being an architect – we might join forces when we leave university!”

Those bike rides tended to be around Murton, and Dalton Park because it was a nice meeting point somewhere between Tayler’s home in South Hetton and Hannah’s in Easington.

The girls have been friends since Year 7 at Easington Academy and they have regularly travelled down to Hartlepool on the buses to shine on the extended diploma in art and design practice.

Hannah said: “We have hit it lucky really because to be able to go to university with a really good friend is fantastic – and was something we were aiming for.

“I am looking forward to going now and gaining that independence. It is a big step but an exciting one. University life in general is an exciting thing, being in the middle of it all.

“And, being in Newcastle, a big city, it is also nice to be somewhere where we have done some of our work at College. It’s going to be nice for us both up there. Even though we have different views, we are similar people.”

Tayler and Hannah’s work can be seen at Hartlepool College’s annual Design Show along with work from their fellow art and design students.

They have thoroughly enjoyed the course, even though the first year was spent largely working independently because of the Covid pandemic.

Tayler said: “The first year we didn’t hardly talk to anyone. Covid meant we all had to sit on our own tables. But in the second year we all started to make friends.

“What’s been nice is that I have discovered what my strong points are. I have realised I really enjoy letting my brain explode on something – and I want to show that going forward, so what better way to do it than design the interior of a big hotel or bar.”

Hannah feels similarly. She said: “Over the two years I have found what I like to do, what I do best. At the start I didn’t really know if I wanted to go to uni. I have found more of what I like during the college course – now I can develop my interest in architecture and interior design further.”

Tayler and Hannah’s work that can be seen in the Design Show includes work from their Final Major Project in response to the given theme of “Regeneration”. In addition to this, the display also features a variety of work from other design projects, along with elements captured from the students’ thinking and design process.

Richie Peacock, Lecturer in Art and Design and an Advanced Practitioner, said: “They have both been focused students. The beauty of this course is that it allows students to diversify their skills and try different things.

“It has allowed them to focus on what they want to do as a career in the second year of the course and to develop skills in line with that. For example, someone like Tayler who is working on interior design work now has great work to show in her portfolio.

“The course is about variety, exposure to new ideas and learning to think creatively. Employers, regardless of what field they are employing in, want you to think creatively, think around problems and having that creative mindset.

“Even if some of our students don’t stay in art and design long term, they have created pathways in the mind, they will be thinking differently away from the traditional ways of doing things.”

For further information about any of Hartlepool College of Further Education’s courses check out www.hartlepoolfe.ac.uk