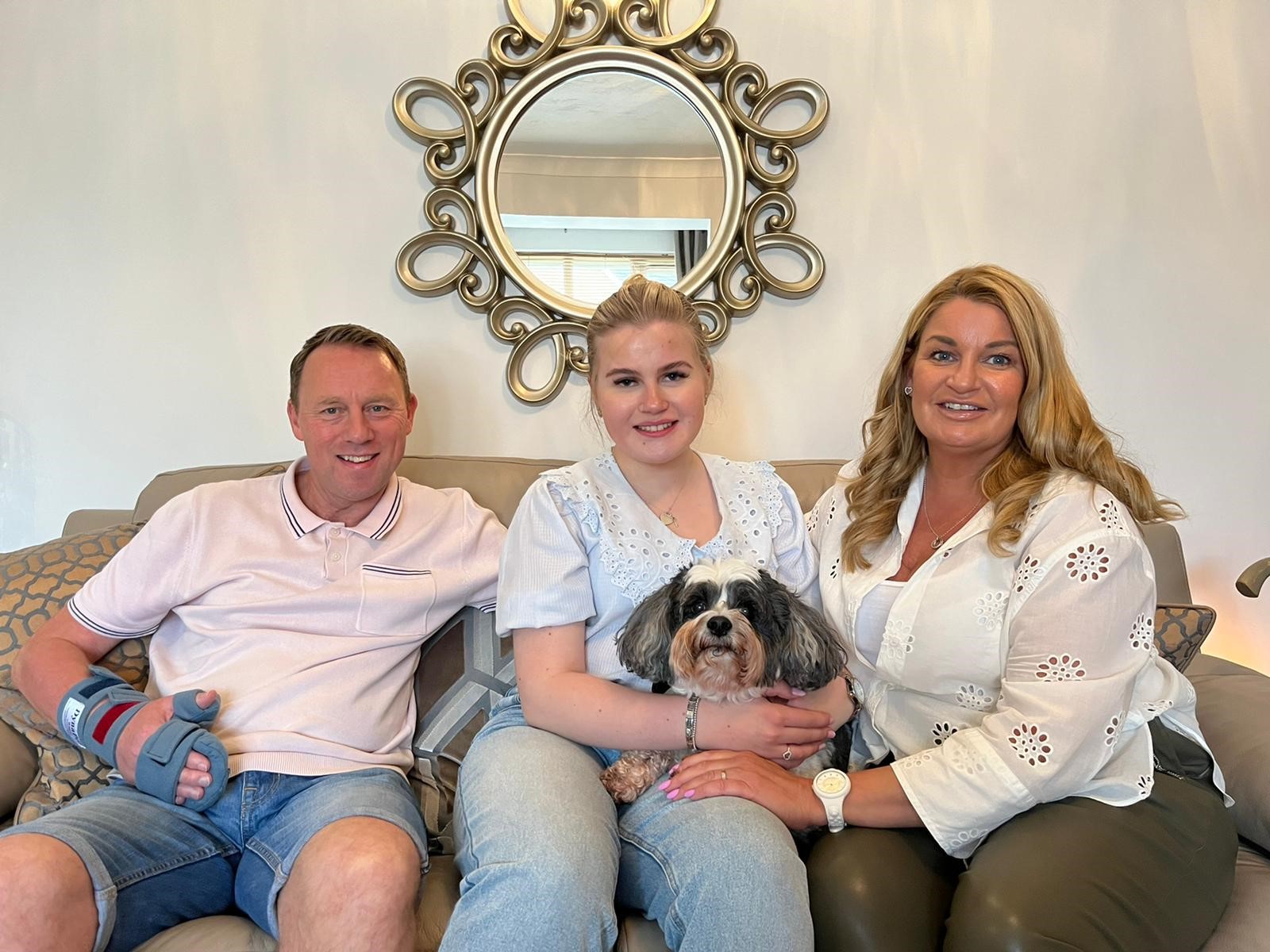 A 53-year-old man from Peterlee will talk about the impact MS Society funded research has had on him this weekend, when he features in a BBC Lifeline Appeal for the charity.

Stuart Wood has been living with MS since he was 27. He says he knew something wasn’t right because he was walking poorly. Now, he gets severe pains in his legs and arms and gets very bad numbness in them too. On one of his hands, his fingers are curled and he gets severe cramps. He says it can be a real struggle in daily life as sometimes the right side of his body is totally lifeless.

This Sunday, Stuart and his family, wife Sharon and daughters Lucy and Katie will feature in a TV appeal on BBC One to help raise awareness of MS and support for the MS Society’s vital work.

Stuart says he faces bladder problems as a result of his MS: “It’s a real worry and I’ve had many accidents with that. The symptoms come on regularly and when I’ve got to go, I’ve got to go now. It got to the point where it was a major issue and I was worried about going out and getting to the loo in time.

But then Stuart found out about a treatment that could help, the early trials into it were funded by the MS Society. He says: “I found out about Botox injections for MS on the MS Society website. Thankfully, through research funded by the charity, I now go to a hospital to get Botox injections in my bladder. I go every six months for that, a procedure in theatre. It’s 20 injections in my bladder and it’s dramatically helped me improve my quality of life. It’s helped my family when we go out anywhere. It’s affected me dramatically, mentally, and that’s a really, really good thing.”

Over 130,000 people live with MS in the UK. MS damages nerves in your body and makes it harder to do everyday things, like walk, talk, eat and think. The MS Society’s BBC Lifeline Appeal focuses on the research the charity funds as well as the support it provides through its MS Helpline and local groups around the UK.

Stuart appears alongside his wife Sharon and his daughter Lucy, who’s 18. When Lucy was just five-years-old the family received the devastating news that she also has MS. They say the diagnosis “hit us like a ton of bricks”. She’s now on a treatment and is managing well, though she lives with bad fatigue and is partially sighted as a result of MS symptoms when she was a child.

Stuart says: “If it wasn’t for the MS Society funding research into drugs, Botox and many others, we wouldn’t be where we are now. As parents, we know MS will get stopped eventually. We’ve got to have faith and trust in the science behind it all. We’d be lost without it, especially our family.”

The Michelin-starred chef, Tom Kerridge, presents the appeal for the MS Society. He knows about the impact multiple sclerosis can have. His dad was diagnosed with MS when he was six, and sadly died when Tom was just 18-years-old.

Tom says: “My father had MS and I’ve seen first-hand how it can not only affect the person suffering from the condition, but send great ripples through family and friends. So I’m very happy to be part of any form of help or recognition for understanding and awareness of MS.

“He lived with MS for over ten years and progressively it got worse. He went from using a walking stick to a wheelchair to then being bedridden. It hugely affected his ability to communicate and he was in need of constant care, eventually in a home, before he passed away in his mid-forties.

“Please watch and share the BBC Lifeline Appeal! This condition is huge, many people are living with it daily. The support and understanding this appeal will generate of how it affects people, the awareness it raises, will make a big difference to many lives.”

Dr Sarah Rawlings is Executive Director of Research and External Affairs at the MS Society: “MS is relentless, painful and disabling. Our BBC Lifeline Appeal will help us raise vital awareness and much needed funds. We hope it will also encourage more people to reach out to us and use our services.”

The MS Society’s Lifeline Appeal will be broadcast this Sunday, 26 June, at 1.50pm on BBC One. It will then be available to watch back online for three weeks at BBC One – Lifeline, MS Society