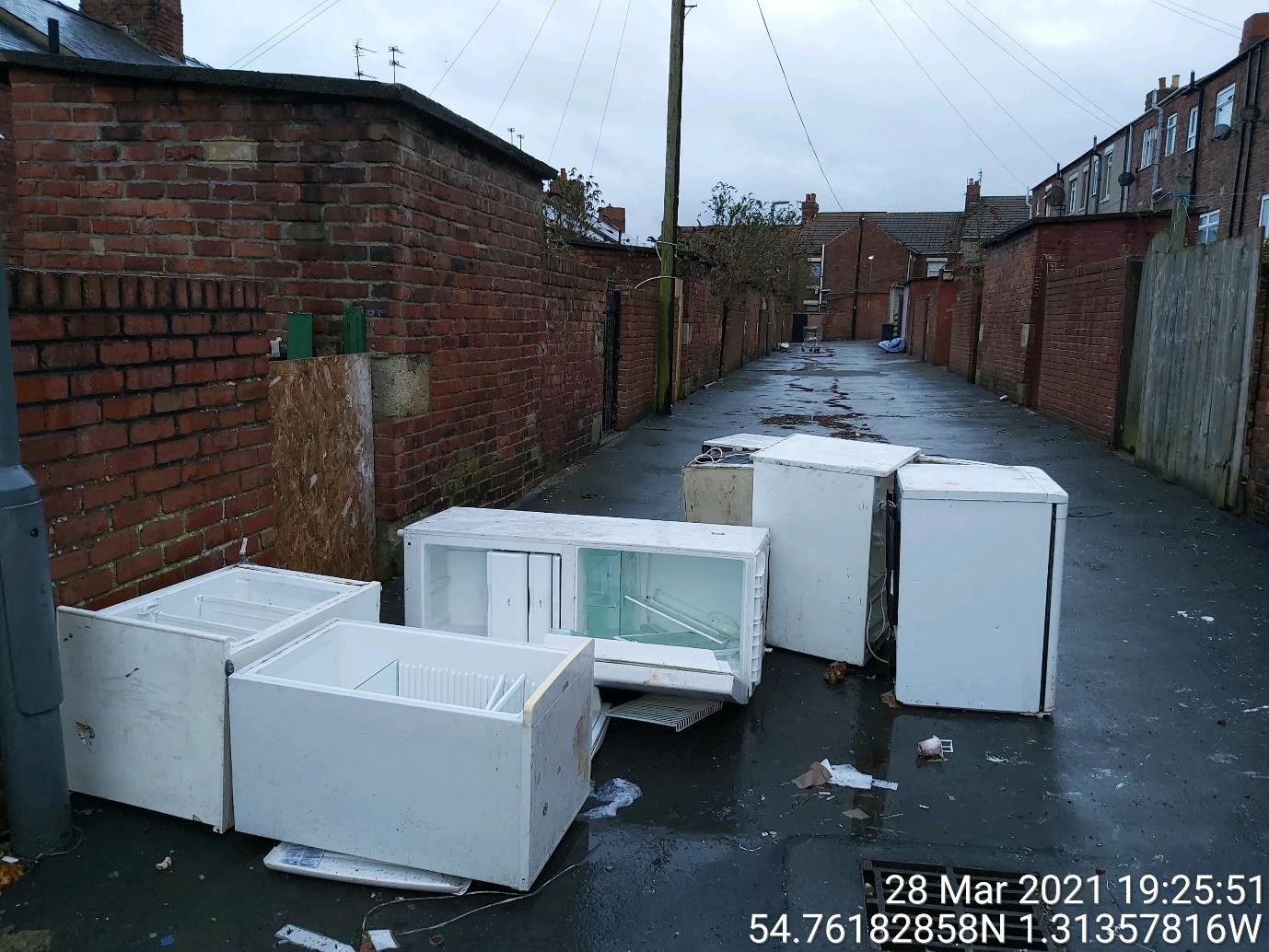 Two men have been ordered to pay almost £2,000 for flytipping offences after a number of fridge freezers were found dumped in a street in County Durham.

Six fridges and fridge-freezes were found by one of Durham County Council’s neighbourhood wardens in the rear lane of Sixth Street, Horden, on 28 March last year.

CCTV footage from the same location clearly showed the registration number of the vehicle used to flytip, with further checks then identifying the registered keeper as Josh Hall, of Sheriff’s Moor Avenue, Easington Lane, Houghton-le-Spring.

A letter was sent to the 26-year-old two days later, asking him to get in touch with the council to help with its enquiries.

When Hall responded on 14 April 2021, he told wardens that his friend had been using the van, and that it had only been returned to him on the day he received the letter from the council.

Hall gave Bradley Middleton’s name over the phone and despite saying he would call back with his contact details, he failed to do so. Further calls to Hall also went unanswered.

When interviewed under caution in May 2021, Hall again named 35-year-old Middleton as one of the men in the CCTV footage and said that he knew the vehicle would be used to collect scrap or household waste. He didn’t ask whether Middleton had a waste carrier’s licence or insurance to drive the van and stated that Middleton did not have a driving licence.

Officers contacted Middleton, of Tay Street, Houghton-le-Spring, to attend an interview but he failed to attend that and a rescheduled interview

At Peterlee Magistrates Court, Hall admitted to knowingly causing controlled waste to be deposited and confirmed he owned and insured the vehicle that caused the flytip and did not take care as to what the driver was doing.

Magistrates also heard that Hall had a previous conviction for flytipping. He was fined £500 and ordered to pay £350 in court costs and a £50 victim surcharge, a total of £900.

Middleton failed to attend court and the case was heard in his absence. He was fined £660 and ordered to pay £280 towards costs and a £66 victim surcharge, totalling £1,006.

Ian Hoult, Durham County Council’s neighbourhood protection manager, said: “Flytipping is an issue that we take very seriously. It is a blight on our landscape that will not be tolerated here in County Durham.

“We are grateful to the majority of people for disposing of their waste responsibly. However, we would remind everyone that their waste is their responsibility and there are many ways to dispose of waste correctly. Unwanted items can be taken to one of our Household Waste Recycling Centres or residents can book a bulky waste collection.

“We would also encourage people to ensure that their vehicles are not being used for flytipping or waste crime offences as we can also seize, and hold any vehicle used for these purposes for up to 15 days.”

To find out more about flytipping and how to report it, visit www.durham.gov.uk/flytipping