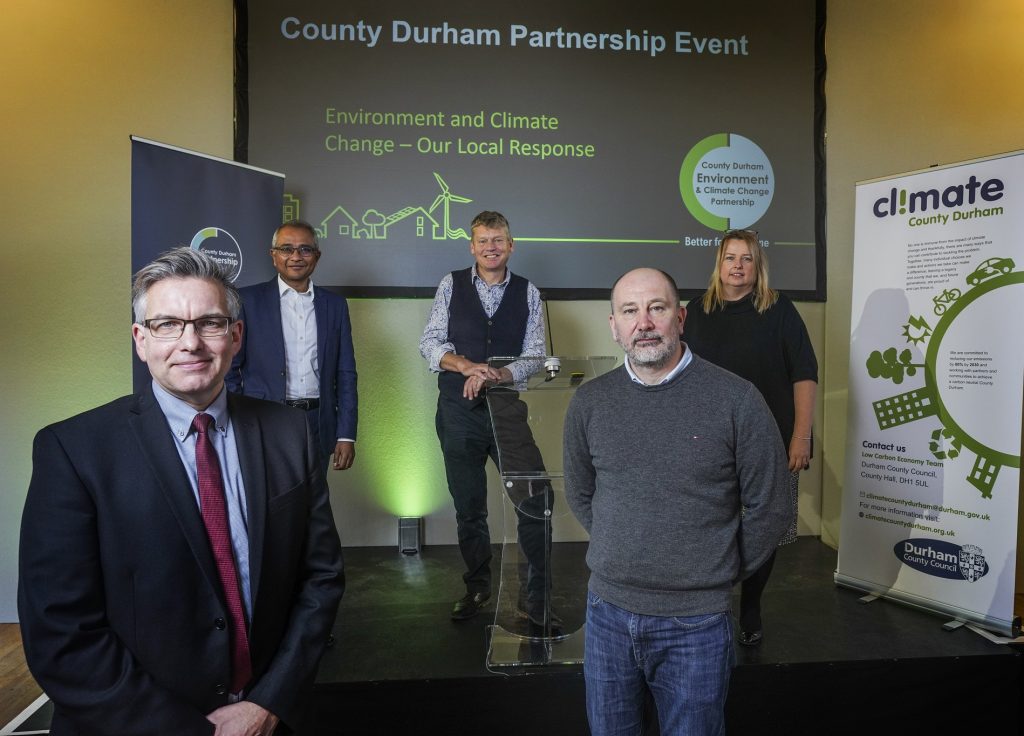 Television presenter, podcaster and author Tom Heap was the keynote speaker at an event aimed at strengthening County Durham’s response to climate change.

The BBC Countryfile host, who has a podcast and book called 39 Ways to Save the Planet, joined representatives from the County Durham Partnership (CDP) for its first in-person meeting since October 2019.

Held at County Hall in Durham City, the event brought together partners from the public and private sector, including Durham County Council, Durham University, County Durham Clinical Commissioning Group and the emergency services. There were also representatives from community groups, voluntary organisations and businesses.

This year’s theme was Environment and Climate Change – Our Local Response. It followed the COP26 conference, which saw global leaders gather in Glasgow to discuss what actions are needed to protect the planet for future generations.

Durham County Council was among the first local authorities in the country to declare a climate emergency in 2019 and environmental issues are a key focus for the CDP.

At the event, the partners discussed further actions that could help the county reach its target of being carbon neutral by 2050. They also looked at ways to conserve natural assets for future generations to enjoy and how to ensure County Durham is more sustainable and resilient.

In addition to Tom Heap’s speech, the partners were addressed by Cllr Amanda Hopgood, Leader of Durham County Council and chair of the CDP; Alan Patrickson, the council’s director of neighbourhoods and climate change; Dr Arnab Basu, chief executive officer of Kromek Group; and Jim Cokill, director of Durham Wildlife Trust and chair of the Environment and Climate Change Partnership – a sub-group of the CDP.

There was also a series of workshops including a session with Durham Youth Council, which provided an insight into how young people feel about environmental issues, in particular single use plastics, and the steps they are taking to tackle them.

“It’s fantastic to see so much positive work already taking place in County Durham and the willingness of individuals, groups, businesses and organisations to support our quest to become carbon neutral.

“There are steps we can all take to reduce our carbon footprint and protect the environment, but by working together we can achieve even more. This has always been the CDPs strength, and I am looking forward to seeing how the initiatives we discussed at the event can be developed for the benefit of our communities and the planet.”

Mr Cokill said: “We can only hope to tackle the climate and ecological emergency that society is facing by working together. We all need to take action, whether as individuals looking at our homes and the personal choices we make, or as part of our working life and influencing the organisations we work for. It’s in our own interest as well as the planet’s.”

At the beginning of November leaders from key organisations across the North East signed the County Durham Climate Change Agreement, demonstrating their commitment to tackling climate change. A new website – www.climatecountydurham.org.uk – was also launched for members of the public, community organisations and small businesses to find out how they can play their part.

Other recent developments highlighted at the event included: