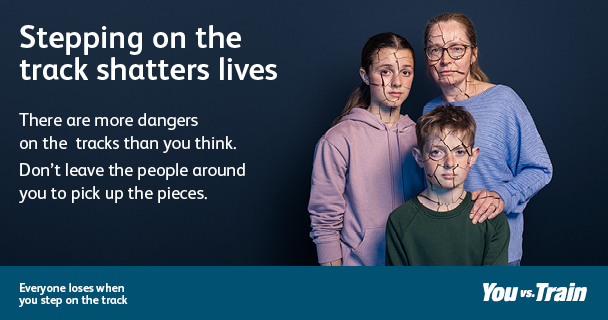 Network Rail is warning people in Durham of the dangers of trespassing after a third of British adults admit they would step onto the track to retrieve their mobile phone.

It comes as hocking new survey1 results have revealed that a third of British adults are prepared to risk their life to retrieve an everyday item, such as a mobile phone, purse, or their keys from the track.

Network Rail is hammering home the dangers of trespassing after there were 975 reported incidents on or around the East Coast Main Line – which connects London King’s Cross and Scotland, via Durham – between April 2020 and March 2021.

Trespassing on the railway can lead to life changing injuries or even fatal consequences. As well as trains not being able to stop quickly or swerve out of the way, there are also hidden dangers such as a lethal current running through overhead lines.

Network Rail and British Transport Police have launched a new campaign – ‘Shattered Lives’ – to warn people about the life-changing dangers on, and around the railway where making the wrong choice could so easily lead to devastating consequences for them, their friends and family.

Louise Cox, Head of Safety for Network Rail’s East Coast route, said: “It’s absolutely shocking that so many people admit they are willing to risk their life for their phone, keys or wallet. It’s never safe to trespass on the railway and the consequences could be life changing or even fatal.

“We want everyone to understand that stepping on the track shatters lives of loved ones and the wider community. Please don’t leave people around you to pick up the pieces.”

Every year sees thousands of trespass incidents across the rail network. Though often seen as a youth problem, the vast majority of trespassers – 75% – are adults. Their reasons for straying onto the network include taking shortcuts and retrieving dropped items from the track.  In the last three years, more than 150 adults2 have either been seriously injured or lost their lives as a result of trespassing on Britain’s rail network.

Superintendent Alison Evans, British Transport Police, said: “Unfortunately, every summer we see a rise in trespass incidents. This summer, please remember that stepping onto the railway at any time is dangerous and illegal. Accessing the tracks as a shortcut or to retrieve a personal possession you’ve dropped will have consequences that stay with you and those around you for life. Don’t let a moment of impatience ruin everything – it’s just not worth it.”