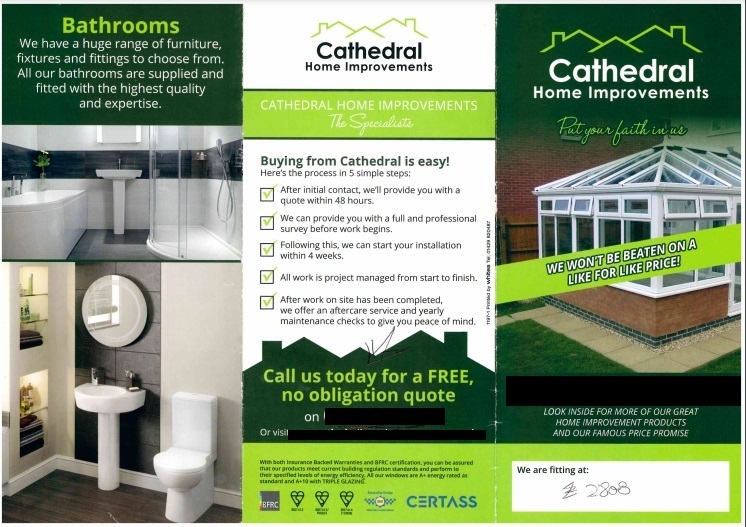 A cowboy builder who ripped off customers in County Durham by carrying out sub-standard work on their homes has been handed a prison sentence of more than two years.

Anthony James Gray, 57, who traded as Cathedral Home Improvements Ltd, defrauded a collective £39,600 from his victims over a two-year period.

One incident saw Gray agree to a loft conversion at a customer’s Wheatley Hill home within her £8,000 budget. Gray failed to provide a full contract and the woman became reluctant to make further agreed payments as time progressed due to the tardy nature of the work.

An invoice provided had a different company name on it, with Gray saying he was in the process of changing the name. However, it was later found to be a company Gray had worked for before he was dismissed.

A building inspector from Durham County Council later confirmed that no application had been made to the council for building regulations, nor had an initial notice been submitted by an approved inspector. He also deemed the work carried out to be “unsatisfactory” and it required re-constructing once the appropriate plans had been submitted and agreed.

The conversion of the loft had to start afresh and the victim was forced to seek a bank loan in order to complete the work.

One couple living in Sherburn Village hired Gray to install a solid roofed sunroom at their property. Despite a price of £12,000 being agreed and the foundations for the work being laid, Gray failed to return to carry out the work for the next two weeks, telling the customer he was unwell.

After being unable to contact Gray, the work was later completed by a third party at an additional cost of £8,000, with the couple losing £7,200 through Gray’s actions.

In interview, he admitted he had never been a builder and held no building qualifications, while also admitting that he “wasn’t very good at running a company” and had never run one before.

It was also discovered that he had misrepresented his accreditation by third party organisations, such as Secured by Design.

Gray, of Topaz Close, Hartlepool, admitted one count of fraudulent trading and four counts of fraud. Three further offences of fraud, which he admitted, were taken into consideration.

In mitigation, counsel for Gray said that there had been no similar offending and that his activities were initially legitimate. He was given credit for his guilty pleas.

The judge presiding over the case spoke of the enormous effect on the victims’ well-being and the confusion and distress which had been caused by his actions. He added that the most significant aggravating feature was the fact that Gray had continued with his business after being interviewed by Trading Standards officers.

Owen Cleugh, Durham County Council’s public protection manager, said: “Gray’s actions have caused a lot of distress to his victims, who believed they were going to have work carried out on their homes to a safe and satisfactory standard.

“He knew he did not have the required skills or expertise to complete the home improvements, yet still chose to accept payment for them.

“We hope that the lengthy prison sentence handed out in this case acts as a deterrent to anyone thinking of engaging in similar activity.”