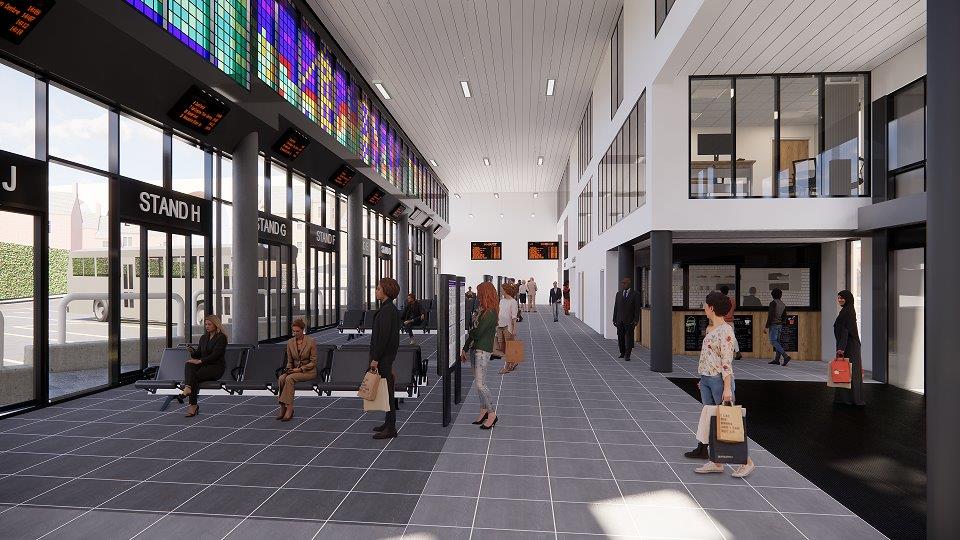 Construction work on a new £10.4 million state-of-the-art bus station in the heart of Durham City has started.

Workers started on site on Monday, with the current bus station closing to passengers and temporary stops being put in place close by.

The new station has been designed to increase the overall space for passengers in a light and airy setting, with improved visibility and safety for buses leaving the station. This includes increasing the reversing area for bus leaving bays and widening the exit onto North Road to improve visibility, with additional pedestrian access also being created.

Inside, there will also be increased facilities including parent and child toilets and a changing places toilet, as well as improved seating and space in the passenger waiting area. The plans also include a two-storey area with office space.

From 15 February, all services which normally stop at the bus station will be relocated to the eastern side of North Road and nearby Milburngate. This will start with stand A at the northern end of North Road towards the viaduct and work back towards the city centre.

When the bus station closes hoardings will be installed around the site and commence the internal demolition. Once all internal hazardous materials are removed staff will then be able to look to demolish the bus station building itself.

Following on from the demolition there are a number of groundworks to be carried out, including diverting a steam which currently runs in a culvert beneath the existing bus station. Once those groundworks are completed this will enable the start of construction of the new bus station later in the spring.

The redevelopment is expected to take 18 months to complete.

In March 2020, the North East region was awarded £198million from the Government’s Transforming Cities Fund to aid the delivery of sustainable transport capital measures and the bus station project is the first scheme in the North East to benefit from the funds, with the additional £6.8million provided by Durham County Council.

Then last month The North East Joint Transport Committee (JTC) allocated £3.6million towards the project following a successful bid from the council.

Once complete it will help support businesses in their recovery from the coronavirus pandemic by attracting visitors to Durham via the station, and also increase footfall into the city centre to support the city’s independent retailers, its hospitality sector, and its indoor and outdoor markets.

Cllr Carl Marshall, Durham County Council Cabinet member for economic regeneration, who also represents Durham on the North East JTC and is the North East board member for Transport for the North (TfN), the North’s statutory transport body, said: “We’re very pleased to be able to announce the date that work will begin on creating this exciting new facility, which once completed will be a huge improvement on the existing site.

“I’d like to take this opportunity to thank residents and visitors for their patience and understanding as we install temporary changes to bus stops in the city while we redevelop the current station into a state-of-the-art transport hub for County Durham.”

For more information about the new bus station and details of which buses will be stopping at which temporary stations while construction work is ongoing, go to https://www.durham.gov.uk/durhambusstation