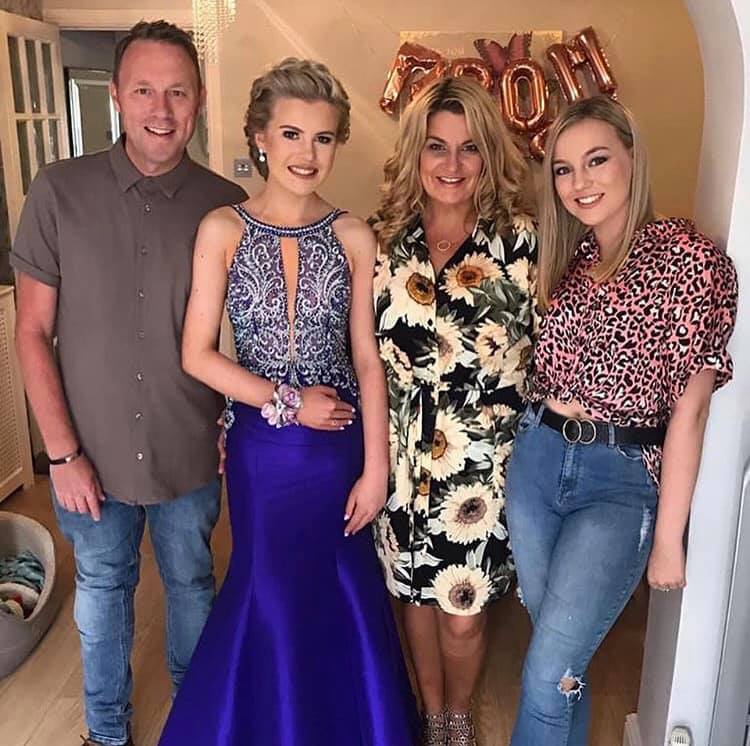 As evidence reveals one in five people diagnosed with multiple sclerosis (MS) in the UK is now under the age of 30, a 17-year-old living with MS in County Durham, is shedding light on the need for new treatments as part of a £100 million charity appeal.

Lucy Wood from Peterlee, County Durham was diagnosed with MS aged five. Her dad, Stuart, also lives with the relapsing form of the condition. An aspiring magazine journalist, Lucy’s MS symptoms are invisible and include fatigue, anxiety and cramps and numbness in her arms and feet.

She said: “It helps that my Dad has MS too as it feels like we’re a team. We both have burn outs, and I can check with him about symptoms. But even though I’ve been living with MS for the majority of my life, I don’t think I’ve ever fully got to grips with the fact I have it. I don’t look disabled, whereas my Dad, who has drop foot and can’t stretch his right hand, does – it means people treat us differently.

“At the beginning of the year me and my dad were on a packed train home from London and didn’t have seats because our original train had been cancelled. My dad was offered a seat straight away, but no one looked twice at me even though I said ‘I feel so tired’. I just looked like a tired teenager to everyone else and I ended up having to lay on the floor in the walkway.

“There’s been other times where I’ve been in my wheelchair and I’ve said ‘I want to stretch my legs’ and young kids will look at me when I stand up – it makes me feel like a fraud. And fellow pupils from school used to call me lazy for having to get lifts to and from school by my parents as they’d forget that I have MS because I look fine.”

According to the MS Society, MS is the most common progressive neurological condition in young people today. There are 130,000 people living with MS in the UK and, in the last year alone, more than 1,250 people under 30 have been diagnosed.1 Lucy is one of 30 under 30s appearing in a new story and photo series from the MS Society and award winning photographer Spencer Murphy, as part of the charity’s Stop MS Appeal. Subjects range from age 16-30, and include a trainee vicar, an expectant mum, and a drummer in a metal band amongst others.

MS is highly unpredictable and, when diagnosed, no one knows how their condition will develop, or how disabled they may become. Approximately 85% of people with MS are diagnosed with the relapsing form, where symptoms come in sudden attacks then fade. Two in three of them will go on to develop secondary progressive MS, where there is no remission and you become increasingly disabled. 10-15% of people have primary progressive MS, where symptoms gradually get worse from the outset.

Lucy continues: “MS research is remarkable – without it I wouldn’t be on a treatment for my MS and if I knew that wasn’t anything for me it would make my anxiety horrendously bad. Without medication I’d constantly be in hospital unable to live a stable life – it would be the same for my Dad.

“Living with MS means I don’t take things for granted and I appreciate life a lot more. I won’t let it stop me pursuing a career in magazine journalism and buying a house with my boyfriend in the future. Instead, I’m going to tell as many people as I can about MS as I’m passionate about raising awareness of the invisible symptoms of the condition I’ve lived with nearly all my life.”

Tens of thousands of people with progressive forms of MS still have no treatment to help them as their condition advances. But the Stop MS Appeal needs to raise £100 million to find new treatments, so no one needs to worry about their MS getting worse. By 2025, the charity hopes to be in the final stages of testing a range of treatments for everyone with MS.

Dr Emma Gray, Assistant Director of Research at the MS Society, said: “Today, most people will first experience MS symptoms in their 20s and 30s, when they’re working on their career, or perhaps thinking about starting a family. The condition is unpredictable and different for everyone, and that can make it hard to plan for the future.

“There are now over a dozen licensed treatments for people with the relapsing form of MS, and some emerging for early active progressive MS – but there is nothing to stop you becoming more disabled as your condition advances. Thankfully, we have never been closer to stopping MS, and with the discoveries being made right now, we believe treatments that slow or stop disability progression are a very real prospect.”