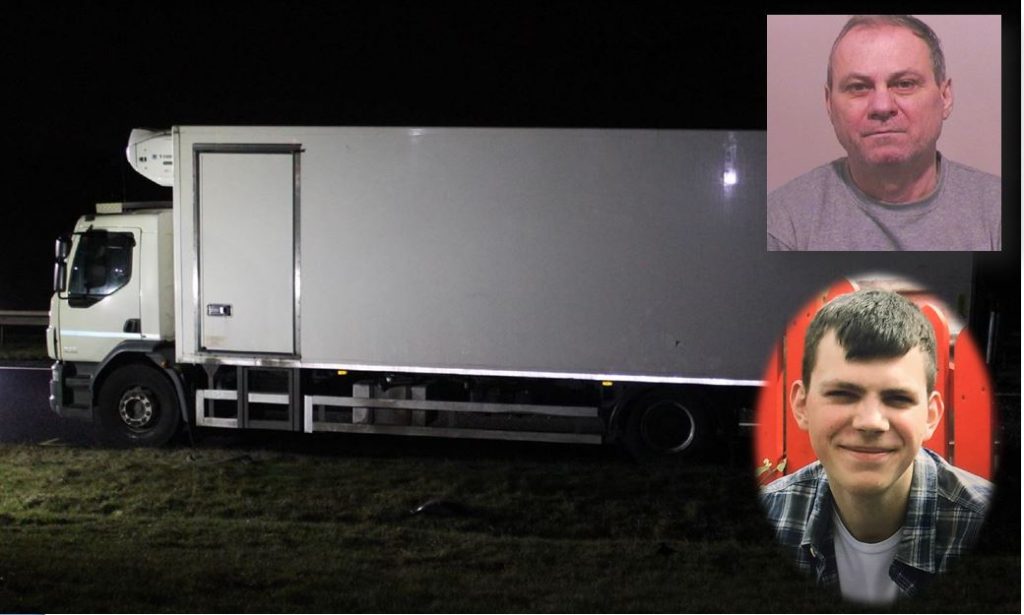 A lorry driver who caused the death of a much-loved son after stopping on a dual carriageway has been convicted.

Marcel Balan, 57, stopped the lorry he was driving on an unlit stretch of the A19 near Sunderland in March last year.

His dangerous decision behind the wheel resulted in the tragic death of 24-year-old John Terence Robinson, of Peterlee, who was travelling behind in his Ford Fusion which collided with the back of the stationary HGV.

The impact of the collision in pitch-black conditions saw the lorry pushed forward eight metres – as the victim’s car went underneath it. Mr Robinson was sadly pronounced dead at the scene.

Balan, of Cope Street, Barnsley, was subsequently charged following Mr Robinson’s death but denied causing death by dangerous driving. But a jury today found him guilty of the offence after an eight-day trial at Newcastle Crown Court. He is due to be sentenced next month.

Following the case, Sergeant Steve Armstrong paid tribute to Mr Robinson’s family and said the incident should act as a sobering reminder to all motorists.

“Our thoughts go out to Mr Robinson’s family and friends who have had to endure an incredibly difficult 10 months since this tragic incident took place,” Sgt Armstrong said.

“Their pain was compounded as Balan opted to take this case to trial, with Mr Robinson’s family forced to re-live the events of that night which saw their son cruelly taken away from them.

“While no ruling can ever take away their anguish, I hope today’s conviction can give them some kind of justice which allows them to continue with the next stage of their grieving process.

“Balan’s actions that night were irresponsible and incredibly dangerous. He has caused a huge amount of pain to so many people as a result of his behaviour behind the wheel.

“The laws of the road are not optional, they are not negotiable – they are there to keep people safe, and by ignoring them Balan directly put the lives of Mr Robinson and other road users in danger. He now must face the consequences of his actions.”

In a statement made following today’s conviction, Mr Robinson’s family thanked police and the community for the support they have received since his death.

A family statement said: “We would like to thank our family liaison officers Gary Morris and Steve Ford for their kind support that we have received since March 13, 2019 until now.

“We are also very grateful for all the professional, painstaking work that both Northumbria Police and the Crown Prosecution Service (CPS) have carried out to see how this dreadful incident happened. We appreciate their evidence and quick responses in retrieving further evidence to ensure that the true facts were established.

“No matter what the outcome of this trial would be, it will not change the fact that we have lost our lovely John and this will affect us for the rest of our lives.

“We would like to give our thanks to John’s friends and work colleagues. They have given us support which has been very touching. We have received personal heart-warming expressions about John from individual colleagues at Faltec, which is the company John was working for at the time.

“Past colleagues of John’s from Nissan and ZF have done the same. This means so much to us.

“Our thanks also go to our family and friends who have been praying for us throughout this time and sending messages of comfort to us. This has kept us going and we appreciate it so much. Thank you.”

The court heard Balan had made a delivery at Simonside Service Station in South Shields shortly before the collision on the evening of March 12 last year.

He then set off to make another delivery at a national coffee chain in Sunderland and was travelling southbound on the A19 carriageway.

But after travelling past the turn-off for the A1231 Wessington Way, Balan made the decision to stop his lorry in the inside lane of the carriageway.

Upon arrest, Balan claimed he had come to a gradual stop on the carriageway because he had heard a noise in his lorry and feared his cargo had come loose. This was contradicted by the data from his vehicle’s tachograph and dashcam footage, and there was no evidence of his load being insecure.

A jury deemed his actions to have been dangerous and today found him guilty of causing death by dangerous driving.

Balan was remanded in custody and he will appear before Newcastle Crown Court again on February 7 to be sentenced.