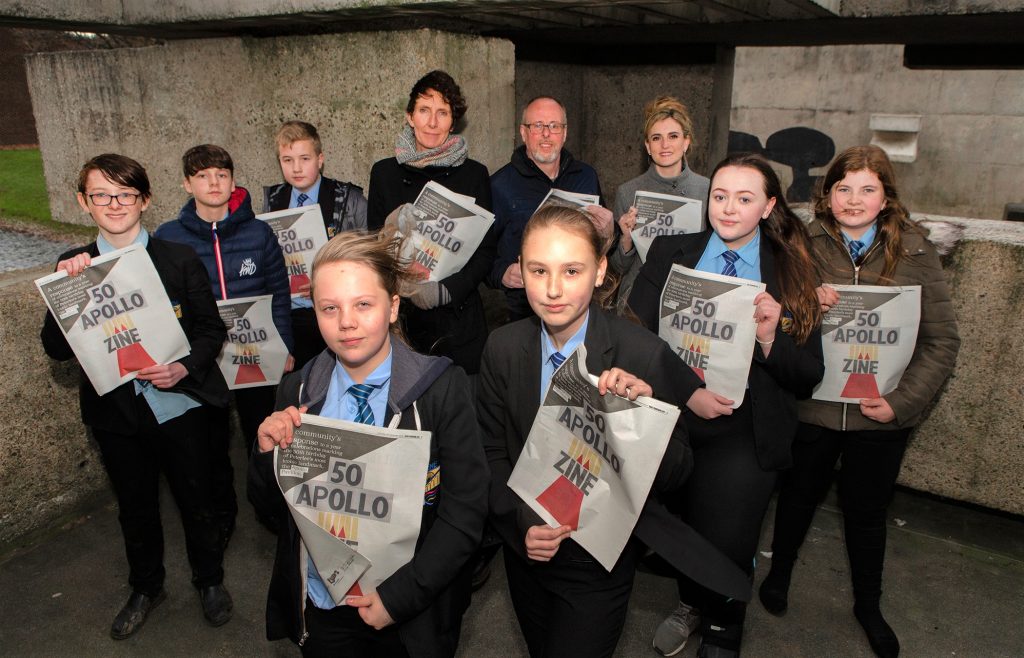 Two student-led art projects designed to celebrate the anniversary of an iconic County Durham structure have culminated with shining success.

Pupils from The Academy at Shotton Hall and Dene Academy in Peterlee have been working with artists throughout the year to mark 50 years for the town’s most unique and iconic landmark, the Apollo Pavilion.

Designed by the artist Victor Pasmore and completed in 1969, the Apollo Pavilion is a Grade II* listed structure which acquired its name in reference to the Apollo 11 Moon landing that year.

The first project saw 12 different schools and community groups of all ages meet with artist Theresa Easton to make Zines, a term derived from Fanzine, an artistic practice which can involve using a whole range of hands-on techniques, such as collage, printmaking, drawing and writing.

Thanks to a partnership between Durham County Council’s community arts team and East Durham Creates, a commemorative community newspaper capturing the spirit of everything that has gone on to mark 50 years since the opening of the Apollo Pavilion was produced.

The 16-page publication was edited by students from The Academy at Shotton Hall and Dene Academy, working with content from hundreds of Zines. Four thousand copies were printed for circulation to all of the schools and community groups that helped to create it.

Working with Steve and fellow artists Sara Cooper and Vicky Holbrough, the pupils explored developing creative interventions within the built environment, designed to transform the character of places and alter the ways in which we engage with them.

At Dene Academy the students chose to transform the main school entrance with long tentacled limbs stretching out from first-floor windows, suggesting that a giant sea creature is bursting out from the English department classroom.

Rochelle Charlton-Lainé, head of design technology at Dene Academy said: “It’s been really good having our students going out to explore the Apollo Pavilion and Steve’s artwork and seeing how the community that lives there interacts with it.

“They’ve loved collaborating with the artists and encountering wider aspects of art, design and technology that are not covered in the curriculum. Also, working large scale has been particularly exciting and liberating for the kids.”

Meanwhile, students across the other side of Peterlee at The Academy at Shotton Hall drew part of their inspiration from hearing Greta Thunberg’s speech delivered to the United Nations on the subject of climate change. Recycling plastic carrier bags, they created an eye-catching ‘rising star’ that can be sited in numerous locations to help raise awareness of environmental issues.

Joanne Gunn, head of art at The Academy at Shotton Hall said: “One of the great values of the project has been getting together lots of kids from different age groups to work together alongside Steve and Sara. They all share a passion for art, but they would never normally get to mix in this way and interact with professional artists like Steve, who create work for out there in the community. It’s been of great value for them to then explore all of this as a group and they’ve all found it incredibly exciting and rewarding.”