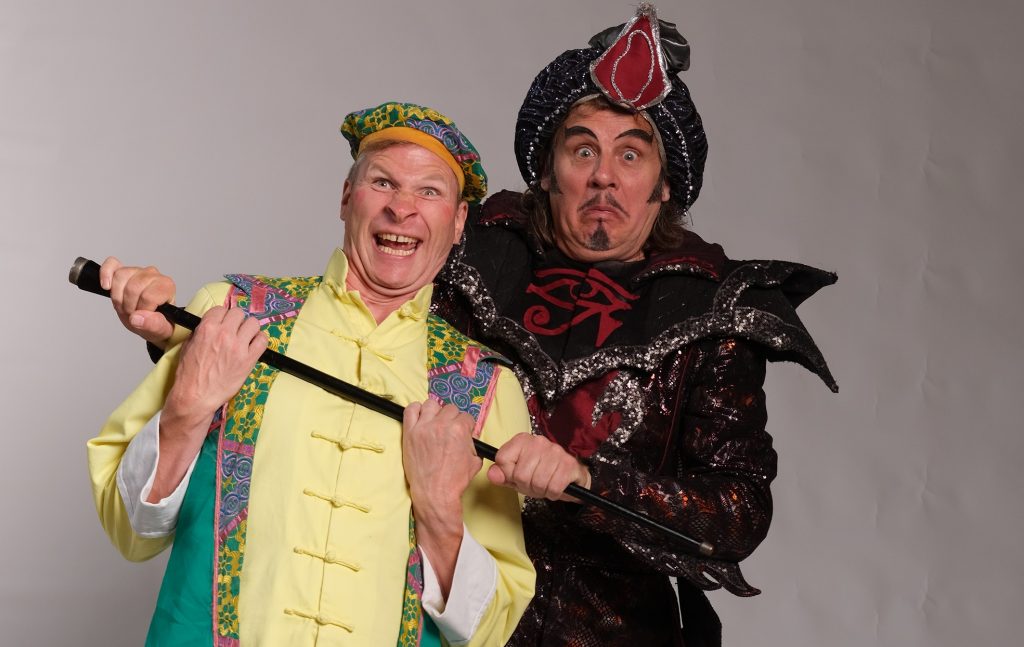 For more than a decade, Neil Armstrong and Paul Hartley have starred in the Gala Theatre’s annual pantomime, delighting audience members of all ages with their jokes and crazy antics.

The pair are now busy with the final preparations for this year’s production, Aladdin, which is now at the Durham City venue, and runs until Sunday, January 5. Tickets are selling fast and some shows have already sold out.

For Neil and Paul, working on the Gala panto is a labour of love and their passion for the genre and storytelling skills shine through in every scene.

Paul first appeared in the production 17 years ago and has graced the Gala stage more times than any other actor. Over the years, he has won over thousands of youngsters as the pantomime’s loveable if somewhat silly character. As soon as he comes on stage and utters his catchphrase “hell-ooo” the children hang on to his every word.

“My favourite role is Buttons in Cinderella,” said Paul. “He is a cheeky chappie but he doesn’t get the girl, so there is a love interest in there and people feel sorry for him. He’s not just stupid, there is a bit more to him.”

In Aladdin, Paul is playing the daft laundry lad Wishee Washee who is just trying to deliver the washing. The show follows streetwise young Aladdin as he attempts to make his town rich by marrying a princess. However, the evil baddie Abanazar’s quest for riches and world domination could scupper the young hero’s plans. Luckily, Police Chief Tai Chi and Wishee Washee are hot on Abanazar’s heels.

Neil, who joined the Gala pantomime team in 2008, is playing Abanazar and could not be happier with his villainous role.

“My favourite part in a panto is always the baddie because you have a licence to be naughty,” he said. “I played lots of other parts when I was younger such as Aladdin and the genie, but since about 2002 I have been playing the villain and I absolutely love it.”

Five years ago, Paul and Neil took on the additional tasks of writing and directing the production. They believe an exciting story is at the heart of every good panto and like to add their own sub plots to the classic tales audiences know and love.

Neil said: “Paul and I don’t write pantos where there is say a juggling act, followed by a song and then a little bit of dialogue. We prefer to come up with an actual story that the kids can follow, with a hero and an antagonist and sub plots running through it. With Aladdin there are certain elements you must include such as a magic cave, a genie and a flying carpet but we then write a story within that.

“The dialogue is the easy part. Paul and I just sit in a room and try to make each other laugh and if we do, it goes in.”

Paul said: “A lot of the planning for the following year’s panto takes place in the dressing room during the current year’s panto. Last year, we were performing Snow White and discussing ideas of what we could do for Aladdin in between scenes.

“Our number one priority is to look at what we can do that we’ve never done before, and what we’ve done in the past that works well that we can adapt and do differently. We are lucky enough to work alongside a very talented and imaginative cast who excel in bringing our ideas to life.”

Good planning is essential, but sometimes it is the unscripted moments that prove the most memorable.

From a sheepish dad sneaking on stage to retrieve a hat thrown by an enthusiastic youngster, to families coming armed with water pistols to retaliate against the annual audience soaking – spectator participation is key.

Neil said: “Once we were performing Cinderella for school groups and I had to run off into the audience with the glass slipper. About 60 kids dived on top of me and there was just this pile of kids with me underneath hanging on to this slipper for dear life.”

Paul said: “I’ll be honest, I really didn’t help. I just stood on stage, laughed and thought ‘how are you going to get out of this one mate?’”