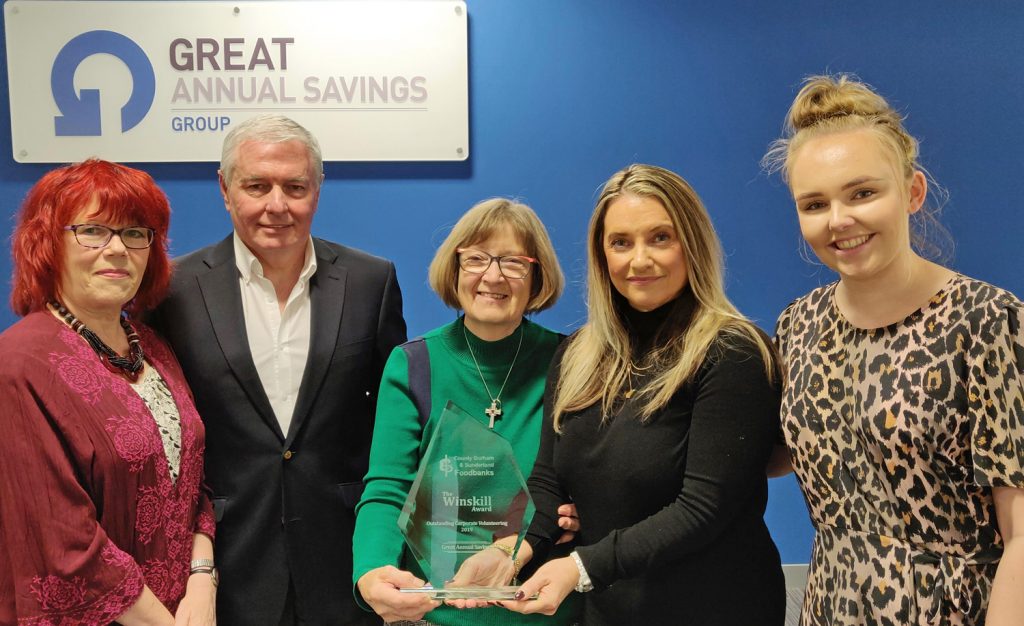 Great Annual Savings Group has been presented with two awards for its contribution to local charities.

Carol Winskill and Chris Jameson-Gates, a DCP Trustee, joined Glenn Jones from County Durham Foodbank at GAS HQ to present the award to the business.

Carol Winskill said: “When Jack and I retired from teaching we visited Uganda.  We had an opportunity to move to Uganda and become missionaries.  Just before we were due to move, a number of instances close to home made us realise there were people we needed to help here and so we decided to stay and form Durham Christian Partnership.

“Through this we formed one of the country’s first Foodbanks, which has become what you see today. Sadly, there are now many more, which require the support of people and businesses like GAS.”

Judith Bennison, Group HR Director at GAS, said: “As a Durham business, we strive to give as much back to the local community as possible and to be recognised for the efforts of our staff is fantastic as they all go above and beyond to support local charities. We’re honoured to have been chosen as the first recipient of the Winskill Award and will continue to support County Durham Foodbank and Durham Christian Partnership.

“We look forward to providing even more efforts for these great causes over the next year.”

Glenn Jones, Chairman of County Durham Foodbank, said: “We’re proud to recognise GAS with the first ever Winskill Award, which means so much to all of us here and at DCP.  You can always tell when GAS have been around the place, because they have a certain aura and energy they bring to the place, full of enthusiasm, and they never turn up to help out empty-handed.”

In addition, GAS carried out an active GAYE campaign across the business which resulted in many staff increasing their monthly contribution.

Judith Bennison added: ““GAS staff have raised an incredible total of more than £70,000 over the last two years for our charities, which we’re all very proud of. We are also on track to have raised even more this year.”

GAS offers every member of the Group’s 300 staff a full, paid volunteering day per year to spend with one of the business’ chosen charities, including County Durham Foodbank.

Durham Christian Partnership has now been running for more than 20 years and Durham/Sunderland Foodbanks help more than 20,000 people per year.  They have more than 1,200 supporters and work with 600 volunteers.