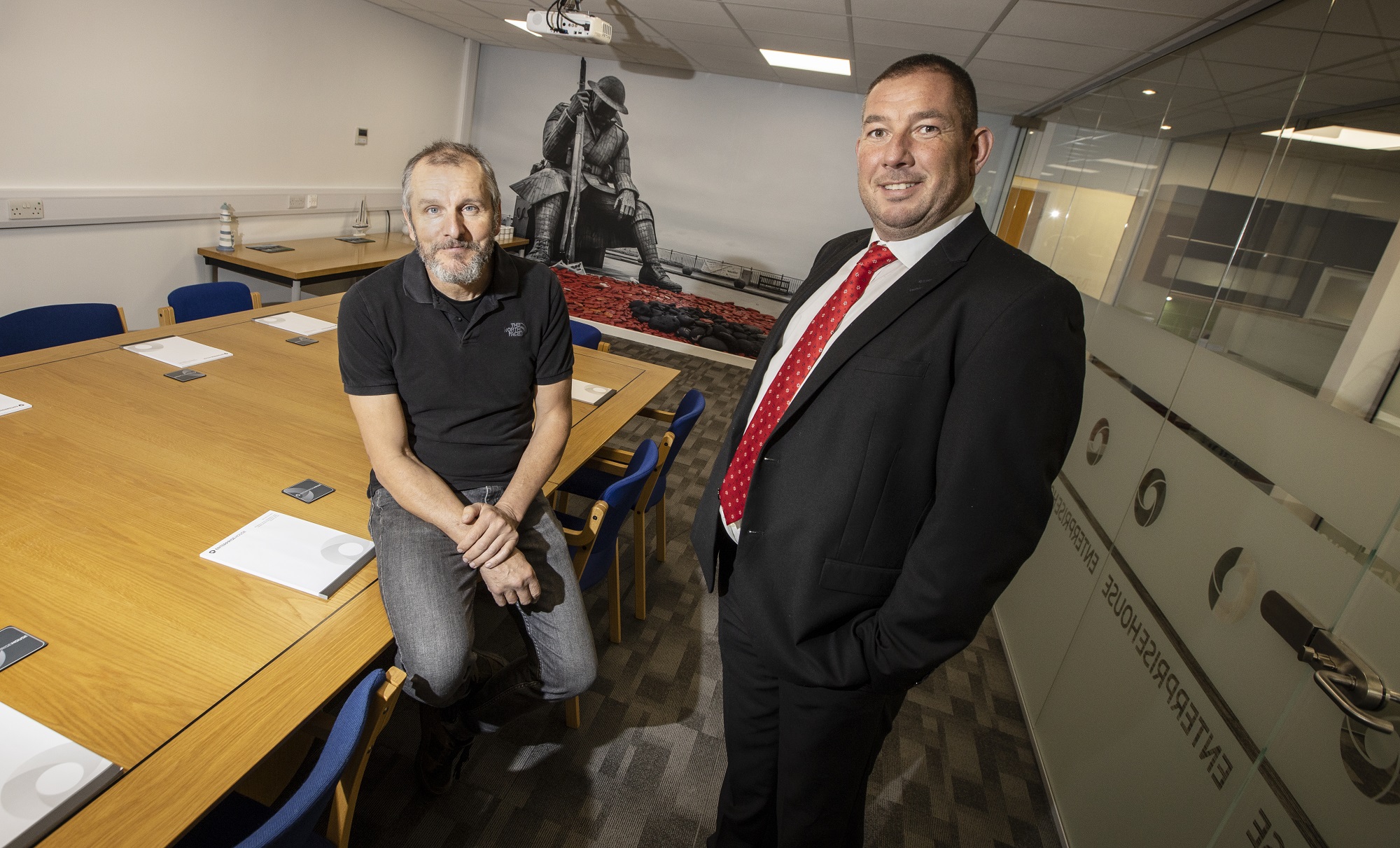 Ray Lonsdale, the man behind the famous ‘Tommy’ sculpture of a soldier from the First World War, which is an iconic attraction within Seaham, will officially open a business centre offering high quality, flexible accommodation for new and growing businesses.

Ray’s ‘Tommy’ sculpture, which is officially named 1101 owing to the fact the armistice went into effect at 11am on November 11, 1918, along with the multi-million-pound regeneration of Seaham, has helped the town become a regional tourist attraction.

And it now being used as the inspiration for the internal décor of Enterprise House Seaham, a new business facility which has been created within an unused building on Seaham Grange Industrial Estate.

Andy Laundon and Lee Bishton, who are directors at electrical contracting firm Retroflo, are the men behind the development of Enterprise House.

Andy said: “We are so passionate about our area and really wanted to put Seaham at the very heart of Enterprise House. We thought about the things that make Seaham the fantastic area it is, and of course nothing epitomises the transformation of the town more than the ‘Tommy’ sculpture.

“Throughout the building there are touches that really celebrate the sculpture, while we’ve also had the walls decorated with visually striking images of the town, including the harbour area.

“These touches really add to the business facilities we’ve created, which include offices of varying sizes, meeting rooms and conference facilities.”

Artist Ray will be the guest of honour at the official opening of Enterprise House Seaham on Thursday, October 17. He will say a few words before signing the artwork depicting ‘Tommy’, which can be found on the walls within the building.

Other attendees at the launch include the Mayor of Seaham Cllr Linda Willis, who will officially open the centre, and representatives from businesses and organisations across County Durham.

Catering at the launch will be provided by the newly revamped and relocated ALs Place, which is as well as a café within Enterprise House also provides private and corporate catering within a 10-mile radius of Seaham.

Speaking about the decision to create Enterprise House, which also accommodates the expanded Retroflo office team, Andy continued: “We knew there was very little office space for new and growing businesses in the area and given the need to find additional premises for Retroflo, converting Enterprise House was a win-win for us.

“Enterprise House is welcoming and modern, offering businesses flexible high-quality space which can take them through their journey from launch or early stage growth up to around 10 people, which is the maximum number of people our biggest office can accommodate.

“The building also provides meeting rooms for our tenants, and conferencing facilities for companies in the area who are looking to host an event or staff or board meeting off-site. Again, there is very little like that available, so we know there is a demand for it.

“A big thing for us is to encourage all of our tenants to interact and help each another, which will not only create a real community spirit within Enterprise House but will also support growth and success.”