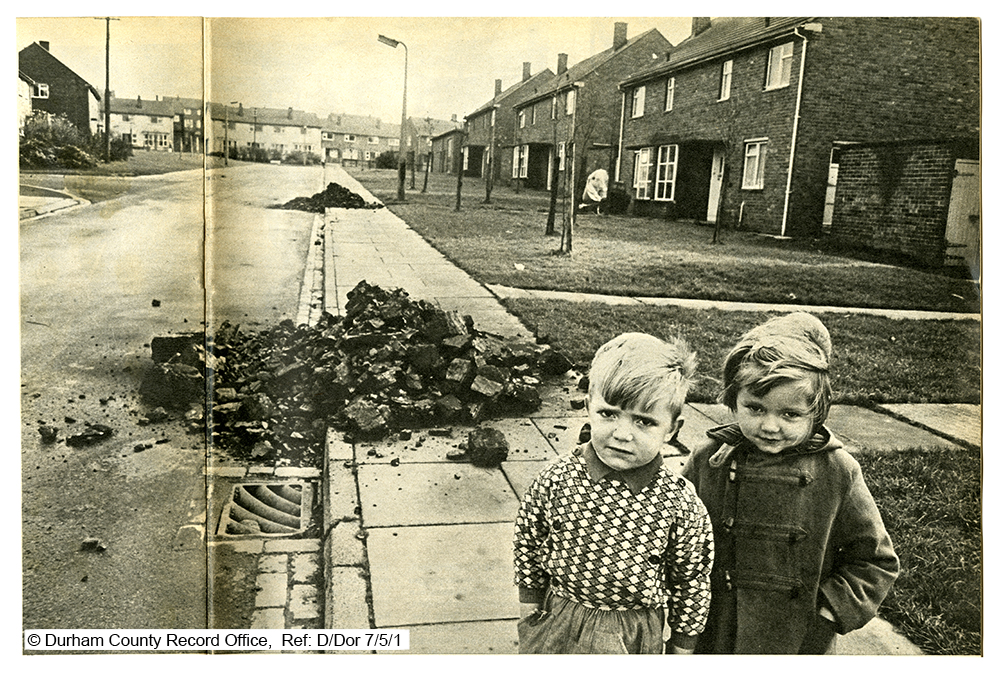 The story of Peterlee and the Apollo Pavilion are the subject of a new exhibition.

When the visionary artist Victor Pasmore took over the design of the emerging new town of Peterlee in 1955 he was told to “do what you like but don’t do what we have done before”.

Pasmore certainly fulfilled the brief, and the public can find out more about his innovative approach, including the creation of his iconic art installation, at Durham County Record Office.

The exhibition, which runs until March next year, coincides with the 50th anniversary of the pavilion’s completion, along with the Apollo 11 moon landing that inspired its name.

Using photographs, plans, newspaper cuttings and letters from the county’s archive, the exhibition delves back into Peterlee’s past, starting with the poor housing conditions that led to the publication of ‘Farewell Squalor.’ This is a historic planning document from 1947 that sets out why the area was a prime location for a housing development.

Peterlee was to be the “miners’ capital of the world,” where the comradeship of the colliery could flourish in pleasant surroundings. It was named after the well-known miner and councillor Peter Lee.

Architect Berthold Lubetkin’s bold plans can be found within the exhibition. They include everything from football pitches and tennis courts, to a rock-climbing centre and a zoo. However, to the architect’s frustration, the National Coal Board (NCB) opposed his plan and, after numerous failed attempts to agree on the siting of housing, Lubetkin quit the project in 1950. He later gave up architecture altogether and took up pig farming.

Eventually, the NCB conceded the coal seams under the eastern half of the town could be sterilised and work on the initial houses began in 1952. The new architect George Grenfell-Baines was under pressure to get the first houses up and this resulted in the construction of rows of “dreary” semi-detached homes that were typical of council houses of the day.

Photographs from the town’s early days show the first residents living amidst the construction, with muddy surroundings and no shops or bus services for many years

A.V. Williams, the general manager of Peterlee Development Corporation, was determined to retrieve the situation. Pasmore, already famous as a leading abstract painter and Newcastle University art lecturer, was just who he was looking for.

The artist’s housing had a distinct cubist feel and a strong colour scheme of black, white and grey. His unusual geometry and flat roofs challenged the landscape, while his use of brick, timber and concrete was a world away from the initial red brick homes.

Exhibition curator Nicola Lyons, search room supervisor at Durham County Record Office, said: “We have tried to include photographs within the exhibition that show just how revolutionary Pasmore’s designs actually were. I think this is particularly apparent when you compare the image we have of the children in front of the kerbside coal deliveries in the north east of the town, to the photographs of residents in front of Pasmore’s homes in the south west. They look decades apart rather than years.”

The Apollo Pavilion epitomised Pasmore’s aesthetic and divided opinion from the outset. For some it is a fine example of brutalist architecture; for others it is an eyesore plagued by graffiti and anti-social behaviour.

Now a Grade II listed building, the pavilion was fully restored in 2009, but the exhibition goes back much further than this. Visitors can view Pasmore’s initial sketches, as well as designs for a second pavilion that was never built. There is also a letter from the artist defending his creation and expressing his fondness of the graffiti it later acquired.

The pavilion has been hitting the headlines again this year, as residents and admirers have come together to mark its 50th anniversary. Last month, a day of celebrations took place near the pavilion in the town’s Sunny Blunts estate. And earlier this year, a Lumiere style light installation by artist Mader Wiermann captivated the crowds who gathered to see it.

Cllr Joy Allen, Cabinet member for transformation, culture and tourism, said: “Nicola and the team at Durham County Record Office have done a fantastic job with this exhibition. It is incredibly informative and a wonderful tribute to the Apollo Pavilion. I would encourage anyone with an interest in Peterlee, new towns and social history to come along and find out more.”

The free exhibition is located at Durham County Record Office in County Hall, Durham City. It is open from 9am to 4pm, Monday to Friday, until March 2020, excluding bank holidays and the Christmas and New Year closure.