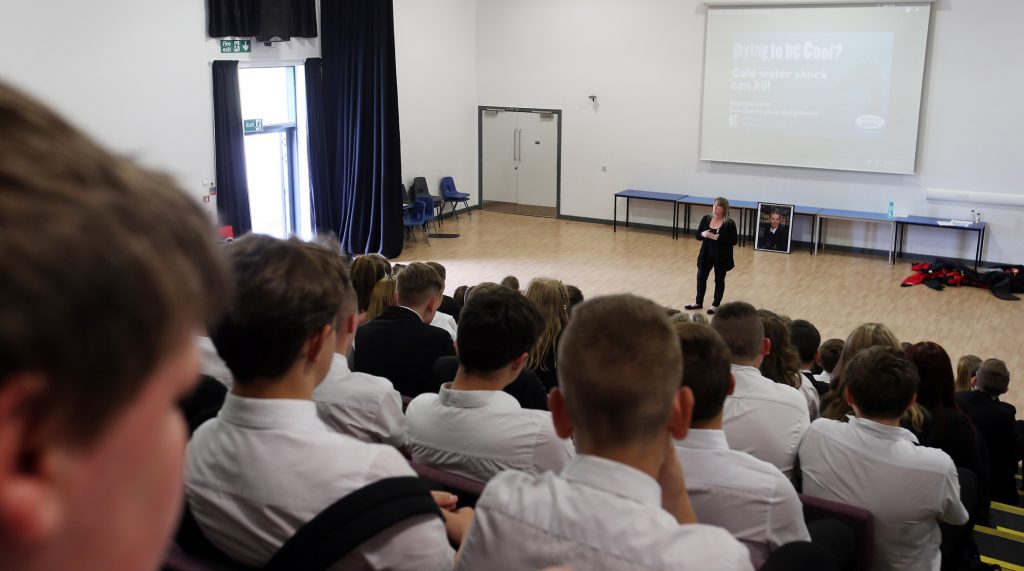 Schoolchildren in County Durham are learning the dangers of jumping into rivers this summer, through the return of a water safety campaign.

Assemblies are being delivered on cold water shock for a fourth year, as part of the Safe Durham Partnership’s Dying to be Cool campaign.

The campaign, led by Durham County Council, seeks to raise awareness among ten to sixteen year olds of cold water shock, which is the body’s potentially fatal involuntary reaction to sudden immersion in cold water.

Since Dying to be Cool launched three years ago, one young person has died in open water in County Durham – in 2016.

The assemblies see council and school staff team up with County Durham and Darlington Fire and Rescue Service representatives and the family of Crook teenager Cameron Gosling, who died from cold water shock in 2015.

In their first three years the assemblies have been delivered to more than 15,000 schoolchildren.

Cllr Lucy Hovvels MBE, Cabinet member for community safety, said: “We are pleased to once again be teaming up with Cameron’s family and the fire service to deliver these assemblies.

“The death of one young person is one too many but the fact we have not had any water related deaths of children in County Durham since 2016 is testament to the success of Dying to be Cool and the assemblies.

“We know how powerful hearing Cameron’s loved ones talk about what happened to him has been for both pupils and staff in previous years and we are sure it will be exactly the same this summer.”

“Our hope has always been that children and staff will take away from the assemblies how dangerous jumping into rivers can be and if they are moved to telling their family and friends what they have learnt, even better.

“If this way we are stopping people risking their lives and getting into difficulty, the assemblies will have been worthwhile.”

Fourteen year old Cameron, a student at Parkside Academy, jumped into the River Wear at Witton Park, near Bishop Auckland, without acclimatising in July 2015. The shock of the cold water caused his heart to stop.

Cameron’s mum Fiona and younger brother Cyle have spoken in previous years’ assemblies on his death and its impact on the family and will do so again this summer.

Mrs Gosling said: “Cameron was fit and healthy and a strong swimmer but he jumped into the river without getting his body used to the water temperature once and it killed him.

“We all miss him massively – he was the comedian of the family and loved being the centre of attention. Even after four years I still find myself expecting him come home for his tea some nights.

“As a family we’re immensely proud that by telling Cameron’s story in the assemblies and through the campaign, he can act as a teacher by raising awareness of cold water shock and hopefully keeping people safe.”

The assemblies, which feature displays of equipment by the fire and rescue service, are being delivered at secondary and primary schools across the county from this week through until the summer holidays begin in July.

Fire and rescue service community safety team leader Mark Henderson said: “We would always advise people to avoid entering the water, however if they do, to never jump or dive straight in and take time to slowly acclimatise their body to the colder temperature and avoid cold water shock. If you notice someone in trouble in the water, never try to rescue them yourself but call 999 and ask for the fire service.”