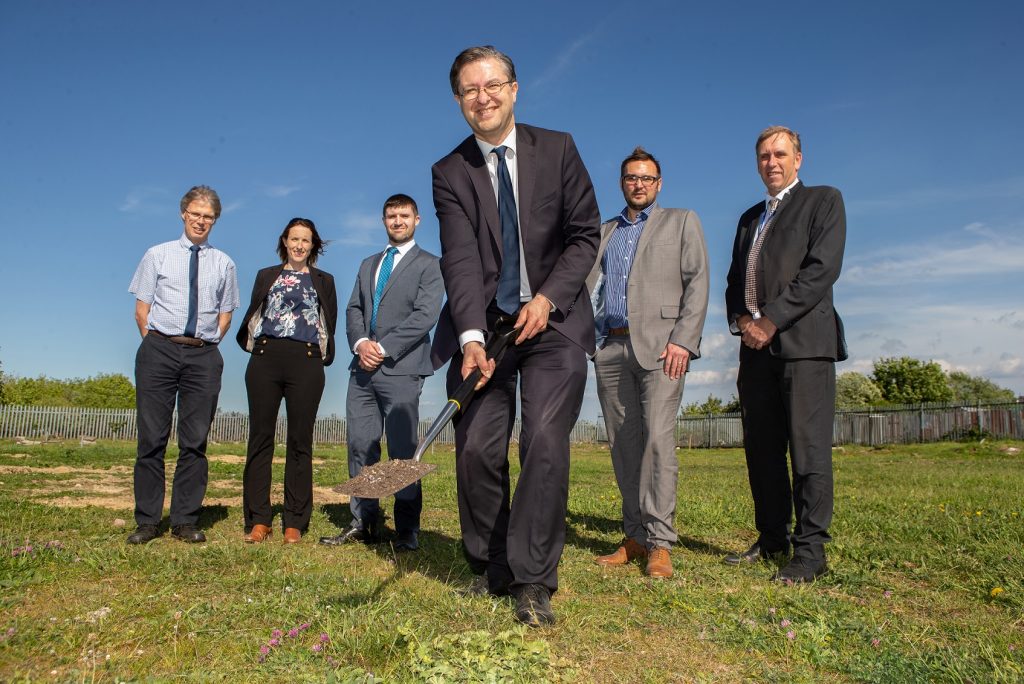 Work is now underway on a new £10.55 million railway station which is expected to bring an economic boost to east Durham.

The scheme, at Horden, near Peterlee, will link the area into the local, regional and national rail network and support wider regeneration in the area.

Durham County Council has been working closely with Network Rail and Northern Railway on the project, which is being funded by the authority, with £4.4 million from the Department for Transport’s New Stations Fund and a grant from the North East Local Enterprise Partnership LEP.

Representatives from the organisations involved gathered at the site on South East View to mark the start of work, which is expected to take about a year to complete.

Cllr Simon Henig, Leader of Durham County Council, said: “I am very pleased to see the start of work on a development which will bring much improved transport links for residents in the east of the county.

“The development will open up employment opportunities for local people while at the same time providing a direct connection to our coastline for visitors travelling from further afield.”

The first stage of work will see the creation of a 139-space car park as well as bus stops. Work will then follow to develop the station, which will feature two 100-metre platforms with shelters connected by an accessible footbridge.

The project will also see the creation of a new road, footpath and cycleway.

The station is expected to open to passengers in spring 2020, with services every hour both north and south.

A public consultation on the plans in 2016 saw almost 1,400 responses with 98.6 per cent of those who took part saying they would use the station.

The facility will play a significant role in the regeneration of Horden and the wider area, with rail industry projections anticipating that more than 70,000 passengers could use the station each year.

The council is working with its partners on a number of initiatives which will see potential commercial investment, housing renewal and the development of community projects in Horden.

The project received funding of £3.34m from the Government’s Local Growth Fund through the North East LEP.

Rail Minister Andrew Jones said: “This demonstrates our commitment to deliver new stations and services right across the country, as we invest £48 billion in the biggest rail modernisation programme for over a century.

“I am pleased that the new station at Horden will open up the north east of the county, improve transport links for residents and create more jobs for local people.”

Ray Browning, programme manager at the North East LEP, said: “This will be a significant development for the people and businesses of Horden and the surrounding areas. The station will not only improve access to employment sites and education facilities in the Tees, Tyne and Wear conurbations but also bring visitors to the Durham Heritage Coast, giving a welcome economic boost.”

Anna Weeks, Northern Railway regional director for the North East, said: “We are really excited by this great opportunity on our Durham Coast route and are grateful to Durham County Council for their commitment in delivering this.

“The opening of Horden station will help connect the local community to Middlesbrough and Newcastle as well as our coastal destinations of Whitby and Saltburn and further afield to the National Rail Network.  Along with our train modernisation programme, with the removal of the pacer units in 2019 and introduction of digital trains on the line, it’s an exciting time for train users in the region.”

Jonjo Ward, sponsor for Network Rail, said: “This is a vital project which will improve transport links across the North East and I am delighted to be able to mark the beginning of work.

“We continue to work closely with Durham County Council, the Department for Transport and North East Local Enterprise Partnership on this scheme and we look forward to the benefits it will bring for rail passengers.”