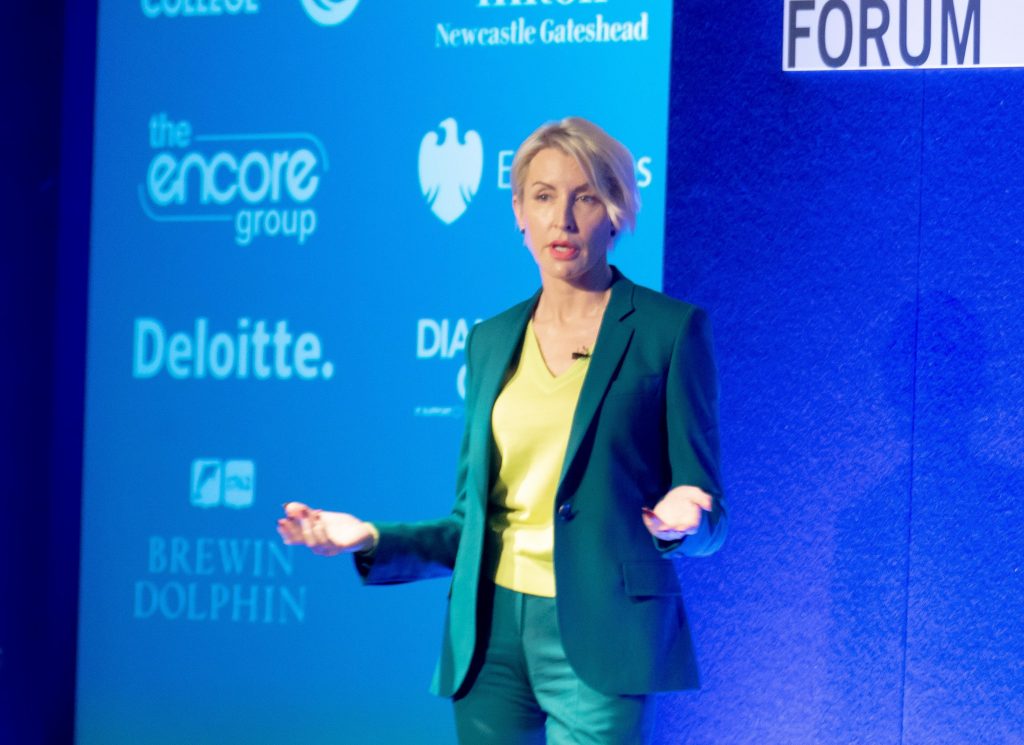 Business leaders have been encouraged to ‘make a difference’ with their success by one of the UK’s most philanthropic, celebrity entrepreneurs during her visit to the North East at the region’s largest business conference.

Speaking to an audience of more than 300 business leaders, Heather Mills, Founder of VBites, a 100% vegan company, spoke about her years of homelessness as a teenager, to losing her left leg after being struck by a police motor bike and how she used these setbacks as the catalyst to become a world record holder and pioneer in plant-based food products.

Brought up in Washington, Heather has invested millions in the North East with three manufacturing facilities for her family-run company, saving and creating hundreds of jobs in the process, which is the largest plant-based manufacturing operation in the world.

But fame and fortune doesn’t mean a great deal to Heather, only supporting healthy living, children and charities through her position of power and success.

She said: “Money doesn’t mean anything unless you’re making a difference with it.”

Heather also delivered an inspiring talk about reaching business goals, including the importance of scaling up, with finance a major barrier to this.

She added: “If you’re a true entrepreneur and get your family aligned with you, then you can have no fears to take that step that will make you successful. The limitation is always going to be cash flow, but we’re going to make it happen.

Benjamin Mee, the man depicted by Matt Damon in Hollywood blockbuster ‘We Bought A Zoo’, recalled the emotional story of how he restored the fortunes of Dartmoor Zoological Park. Determined to make it a success, it was in 2006 when Benjamin, a former journalist, and his family started their business journey after taking on the previously dilapidated Dartmoor Zoo.

The conference’s opening speaker, Jon Smith, spoke about how he overcame a stammer at the age of 15 to become a leading, entrepreneurial sports agent working with the likes of Diego Maradona and the England National football team. He has since established First Artist, a media, entertainment and events empire.

Jim Cregan shared his experiences building Jimmy’s Iced Coffee, which was created as a result of road tripping across Australia, into a household brand. On his return to the UK, together with his sister Suzie, the pair established the recipe, brand and business.

John Hays, of Hays Travel, also spoke about his entrepreneurial journey turning the Sunderland-based company from humble beginnings into the UK’s best high street travel agent with annual sales of more than £1bn.

Together We Can Take On The World, which took place at the Hilton Newcastle Gateshead, was hosted by BBC presenter, media personality and illustrator Alfie Joey. The conference was sponsored by event partner North East Growth Hub, as well as Sullivan Brown, Visualsoft, Park Commercial and Durham City Incubator, with MAKE it Sunderland sponsoring the conference brochure.

It is one of the highlights of the Entrepreneurs’ Forum’s extensive calendar of events, which brings together more than 300 leading entrepreneurs from across the North East for a day of peer-to-peer learning.

James Robson MBE, Chairman of the Entrepreneurs’ Forum, added: “Our conferences are a major part of our calendar of events and this year’s Together We Can Take On The World was another fantastic and inspirational day.

“It brought together many of the region’s business leaders and entrepreneurs, providing them with plenty of inspiration, which they can apply to their own enterprises and hopefully help to drive forward growth and job creation to further support and strengthen the North East’s economy.

“I’d like to thank our line-up of inspirational speakers for sharing their experiences and stories over the course of the day, as well as our sponsors and partners, who have helped make it a success.”