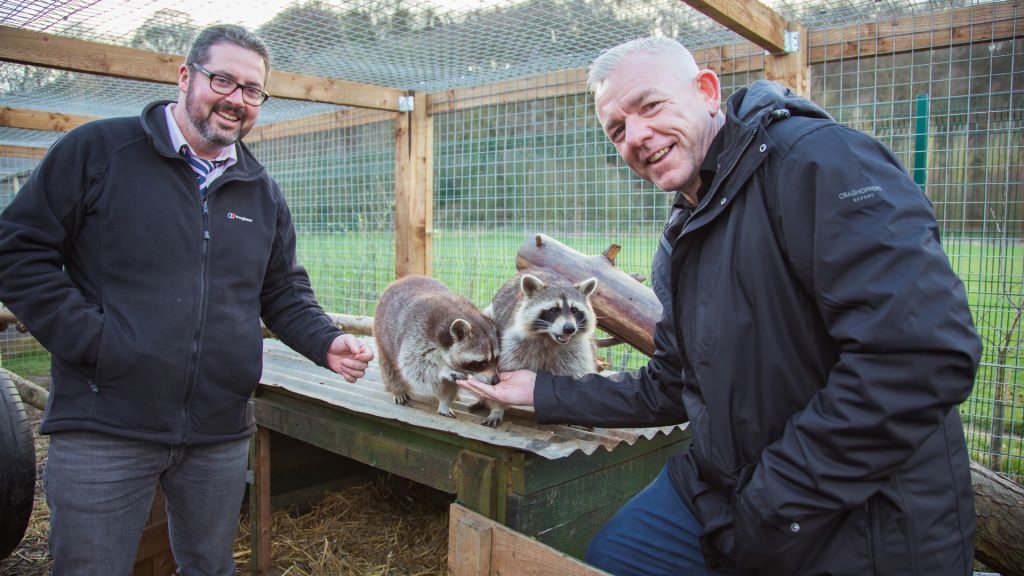 A quartet of racoons, and a pair of raccoon dogs in dire need of a new place to stay have been gifted fantastic new enclosures at East Durham College’s Houghall Campus in Durham.

Dere Street Homes & Deerness Fencing & Landscaping Ltd (part of Esh Group) stepped in to help by donating all the materials needed and designing and installing the enclosure from scratch after finding out that the raccoons were to be rehomed at the college.

The four raccoons – Itsy, Bitsy, Tonto and Ranger – and the raccoon dogs, had to be rehomed after their old home, an animal sanctuary, unfortunately had to close. East Durham College’s Houghall campus, which offers several animal care courses in a multi-million pound, purpose-built animal care centre, jumped at the chance to rehome these amazing creatures.

Craig Sproat, Lecturer in Animal Care at East Durham College, was involved in rehoming the raccoons, and liaising with Dere Street Homes & Deerness Fencing & Landscaping Ltd to build the enclosures.

Craig said: “It was a fantastic opportunity for the college to rehome these raccoons. Not only do we help some animals in need, but this further expands the experience of our students, by allowing them to care for and interact with unusual animals here at the college, just like these raccoons and raccoon dogs.”

A partnership was formed between Dere Street Homes & Deerness Fencing & Landscaping Ltd to build the new enclosure which came about after a member of staff at Houghall first got in touch with Dere Street Homes, asking if any materials could be donated.

Jim Bates, Managing Director of Deerness Fencing and Landscaping was given responsibility for heading up the project.

Jim said: “Sean McQuaid, Dere Street Homes Managing Director and I met with Craig on site back in October 2018 and it was clear to us both very early on that not only did the college need the materials to construct a sturdy enclosure, but that they’d benefit from the design assistance that the Deerness Fencing & Landscaping Team could provide as well as providing a team to construct the enclosure in time for the raccoons arrival just before Christmas.

“We saw this as a fantastic opportunity for East Durham College students to get involved with the project, so once the design was agreed upon, We marked out the enclosure imprint on-site and were able to task the students with supervised excavating and clearing of the topsoil in preparation for the team from Deerness to begin installing the enclosure.”

Lindsay Haggis, Curriculum Manager of Land-Based Studies, is delighted with the new enclosure. “From all of us at Houghall – and from the racoons! – we’d like to thank the team at Dere Street Homes & Deerness Fencing & Landscaping Ltd for the fantastic new enclosures.

“It’s great to see the raccoons and racoon dogs taking so well to life at Houghall – it can be stressful for any animal to move home, but they’ve really settled in and their huge enclosures give them plenty of space to exercise too.”

Whilst nervous at first, the raccoons have really adapted to their new home. They can now be seen regularly out of their enclosure interacting with students and staff at feeding time and are more than happy to clamber up on somebody if they think there’s a peanut on offer! The raccoon dogs, while still nervous as is their temperament, are gradually becoming more confident and emerging from their enclosure more regularly.

Jim Bates added: “I was thrilled to meet and see the raccoons in their new home, and it’s obvious that the enclosures have certainly lived up to expectations.”

“It was a great project to be involved in and something very unusual to be able to help with.”

East Durham College would like to thank all the staff at Dere Street Homes & Deerness Fencing & Landscaping Ltd for their kind generosity and support in making these new homes for the raccoons a reality.