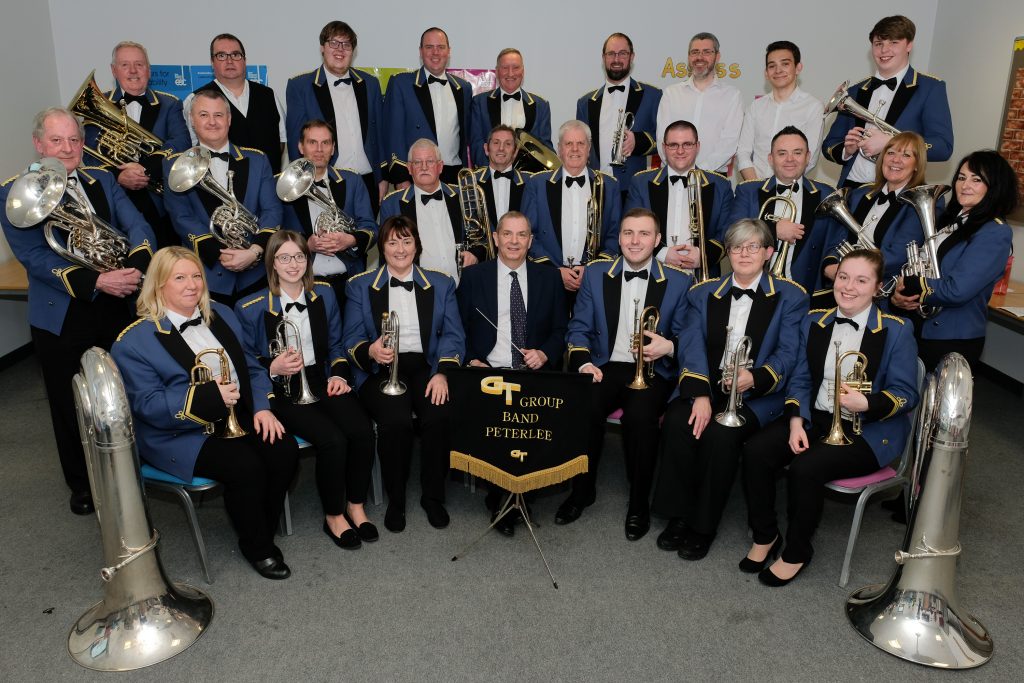 One of County Durham’s most popular brass bands has announced plans to establish a music academy as part of its 25th anniversary celebrations.

GT Group Band Peterlee hopes the academy, together with the creation of a youth band, will encourage and inspire the next generation of brass and percussion players to become involved.

The band, which is marking 25 years since striking a sponsorship deal with Peterlee-based manufacturer, GT Group, is currently in negotiations to buy a building in Shotton Colliery to use as a rehearsal space.

It also intends to hold a public concert in Peterlee later this year to acknowledge the support the band has received, both from GT Group and the people of east Durham.

All money raised from the event will be donated to a cancer charity – in memory of the band’s former professional musical director, Simon Kerwin, who died in November following a short illness.

The respected composer and musician, who conducted the band in the North of England Championships last March and provided inspirational leadership, was an enthusiastic supporter of establishing a music academy.

Trevor Langthorne, Secretary of the GT Group Band, said that the music academy, which will be open to young people from local schools, will use professional tutors to develop their musical education.

GT Group Band Peterlee is currently in the process of appointing a new professional musical director who will work with the band’s resident conductor to set up the academy.

The band will also work in partnership with local councils, the police and community-based organisations to engage with local youngsters and promote the academy as an important community resource.

Mr Langthorne said: “Our 25th anniversary year is a momentous one. It allows us to reflect on past successes, as well as look forward to exciting new projects, including the music academy and youth band.”

“We wish to encourage local young people to join us and feel a pride and passion for a musical tradition which is deep-rooted in the former coalfields of the North East.

“The band has gone from strength to strength thanks to GT Group’s generous sponsorship. However, by setting up an academy and youth band, we hope to ensure it will continue to flourish for many generations to come.”

Tim Jayes, Managing Director of GT Group, said: “Brass band music and the GT Group Band Peterlee are embedded in the culture of County Durham. We fully support the initiatives announced to develop the musicians of the future and further strengthen the band’s bond with the local community.”

“GT Group has been delighted to sponsor the band over the past 25 years and will continue that support going forwards.”

Originally called Peterlee Town Band, it changed its name in 1993 following the sponsorship agreement with GT Group founder, Geoff Turnbull. The arrangement continued following the acquisition of the organisation by Knorr-Bremse Group, which has committed its ongoing support to the band.

Since the sponsorship agreement, the band has gone from strength to strength, having performed at events and competitions nationwide, including at the Royal Albert Hall.