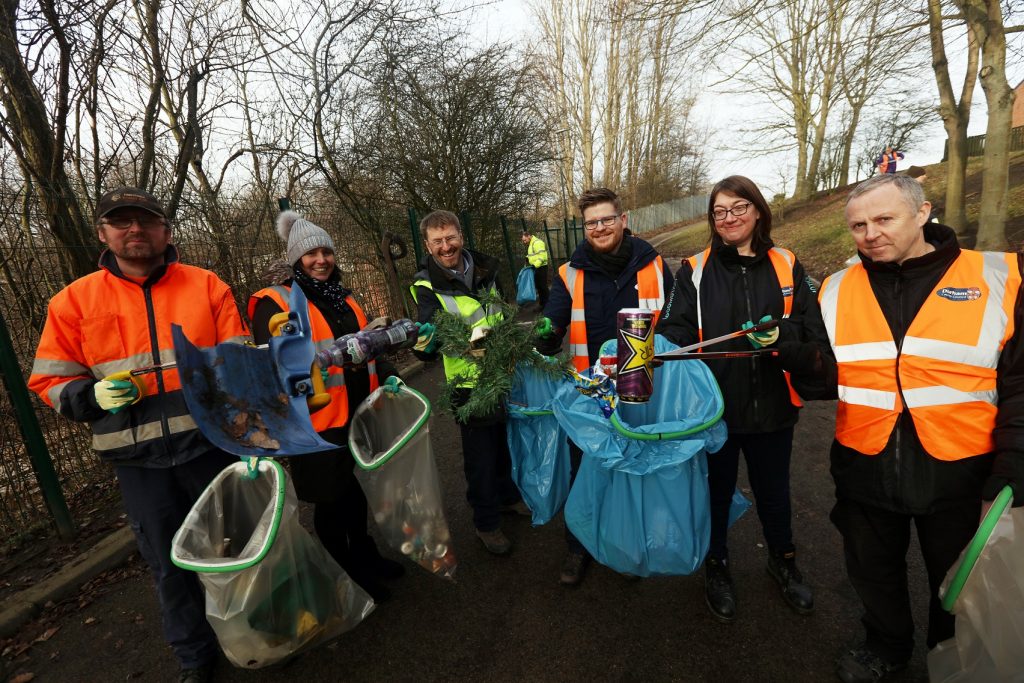 Communities and individuals across County Durham and Darlington are being urged to become Litter Heroes by joining the annual ‘Big Spring Clean’.

LitterFree Durham & Darlington, which celebrates its tenth anniversary this year, has once again teamed up with Durham County Council and Darlington Borough Council to inspire local residents, community groups, schools and businesses to give their area a spring clean in the annual litter-picking campaign.

A special launch event was held at Locomotion Museum in Shildon on Valentine’s Day, when volunteers were asked to show their love for where they live, ready for the start of this year’s Big Spring Clean, which runs from Tuesday, 19 February until Tuesday, 9 April and will see litter picks organised across County Durham and Darlington.

Campaign organisers gathered at the museum and used train tickets, donated by Northern Rail and The Bishop Line, to travel along the track between Newton Aycliffe and Shildon, clearing rubbish as they went. 42 volunteers collected 86 bags of waste; 47 of non-recyclable and 39 of recyclable items.

During last year’s Big Spring Clean campaign, 3,041 volunteers took part in 204 litter picks across County Durham, donating more than 5,267 hours of their time during which they collected 3,021 bags of rubbish.

In the Darlington area, more than 1,090 people took part in 68 events, donating more than 1,150 hours of their time to clean up streets, parks and green spaces from which 1,102 bags of litter were collected.

“Public awareness about the problems litter creates in our environment and the damage it can do to our wildlife has never been greater and we all need to do our bit to tackle it.

“Everyone needs to either bin their litter, in an appropriate recycling or waste container or take it home and if appropriate recycle it; and we’d love you to take the next step and join our litter army – we can provide everything you need to get started and even organise a litter pick of your own.”

Councillor Brian Stephens, Durham County Council’s cabinet member for neighbourhoods and local partnerships, said: “The Big Spring Clean has seen fantastic success so far, with tens of thousands of people taking part of the decade it has been running, and I’m very proud to watch it continue to grow, with more volunteers joining in each year.

“For 2019, we’re hoping to make the campaign even greener, by recycling as much of the collected litter as we can. Previously, all waste from the litter picks was sent for incineration, a process which creates usable energy, but which is not as energy efficient as recycling.

“This year, we’re encouraging volunteers to collect recyclable plastics, tins and glass separately so they can be recycled rather than incinerated, making the whole scheme even better for the environment.”

“We’re delighted to once again be working with LitterFree Durham & Darlington and Durham County Council for this year’s Big Spring Clean.

“We have a growing army of Street Champions who regularly take part in litter picks across the borough and more and more people are joining this annual initiative. We’re incredibly grateful for the efforts of all those who take part and to those who help keep our streets clean year round.”

In County Durham, Big Spring Clean focusses on communities taking pride in where they live and running their own volunteer litter picking events to remove waste from their neighbourhoods and green spaces.