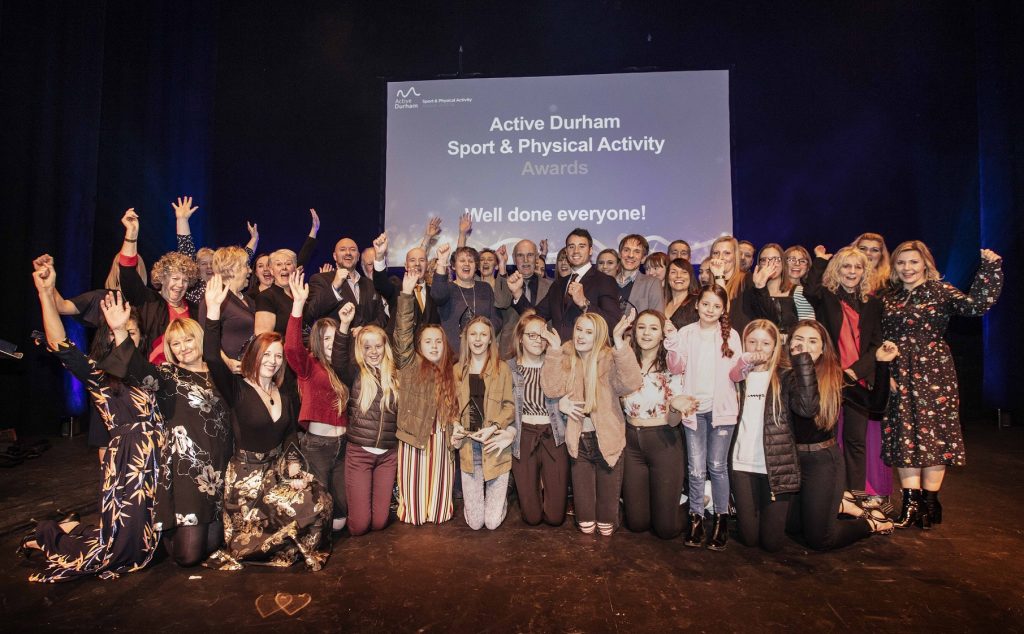 The talent and commitment of individuals and organisations who champion sport and physical activity have been recognised at a County Durham awards ceremony.

The awards ceremony, held at the Gala Theatre in Durham City, saw the winners of 13 categories in four local area events come together to be recognised and to celebrate their outstanding achievements.

Among the winners was The Academy at Shotton Hall, which was recognised for Secondary School Contribution to Sport & Physical Activity

Shotton Hall achieved its best GCSE PE results for some time.  It focuses on encouraging all students to participate for fun and enjoyment with activities including dodgeball and cheerleading, as well as traditional sports.  The Saturday club offers students from Shotton Hall and other secondary and primary schools in the area, the opportunity to participate in a variety of activities free of charge.  This has had a positive effect on students from a low-income background.

The awards are organised by the Active Durham partnership, with overall winner awards presented in the 13 categories.

Former Olympic gymnast, Kristian Thomas, attended the event as guest speaker, presenting winners with their awards and giving an inspirational speech to over 300 guests.

Kristian said: “I’m delighted to be attending the County Durham Sport and Physical Activity Awards. Sport has given me incredible opportunities and I firmly believe sport and physical activity should be accessed and enjoyed by everyone. It’s great to see County Durham celebrating the many positives it brings to everyday life.”

Independent Chair of the Active Durham partnership, Annie Dolphin OBE said: “We received 229 nominations for the local awards, all of a very high standard and including some really inspirational people, so our judges have had some very difficult decisions to make picking both the local winners and then deciding which of those were most deserving of the county awards.

“We’re delighted that County Durham has so many people who are dedicated and passionate about sports and fitness. Our 13 winners really reflect the great range of initiatives on offer to help people of all ages and abilities to enjoy physical activities.”

For more information on the work of The Active Durham partnership please go to http://www.activedurham.org.uk/

The other winners are listed below:

Sue has volunteered at Middleton in Teesdale Community Gym for the past seven years and has supported hundreds of people to be active.  She undertook her own training to become a walk and cycle leader and a qualified Zumba and Block Fit teacher.  She delivers weekly classes in Middleton in Teesdale Social Club, volunteers in the gym, delivers to the WI group, Butterwick Hospice, Community Hospital in Sedgefield and leads regular walk and cycle rides.  She goes above and beyond, and is a true role model.

India Oates suffers from Cerebral Palsy and has an Athletic Classification of T35.  She is currently ranked 2nd in the UK for 100m and 1st in the UK for 200m in the T35 category.  She was taken to Switzerland by British Athletics to be classified internationally and ran at the Notwill Grand Prix where she competed against Internationals and came 2nd in both the 100m and the 200m.  She represented England at the CPISRA World Games in Sant Cugat, Spain.  She ran in the T35 100 and 200m races and won a Gold medal in both events.

Coach of the Year

Paul is the head coach of Derwent Valley Trail Runners.  His sessions are regularly attended by over 60 children each week aged between 4 and 16.  The club runs throughout the year and Paul is there every week encouraging the children to improve.  Many have gone on to represent the club in the North Eastern XC Championships.  The children come back every week because they know they are going to be challenged, work hard, sweat but above all, enjoy themselves.

Young Coach of the Year

Simone’s passion for taekwondo has spurred her on to open her own club, Salamander Taekwondo Middlestone Moor.  Along with running her own club Simone coaches at a number of after school clubs that provide children with their first taste of taekwondo.  Simone’s new club aims to bring taekwondo to all, in a fun and safe environment.  She coaches people new to the sport, as well as athletes that go on to compete on the National and International stage representing Great Britain.

A small school in the Lower Dales, Peases West is big into sport and physical activity.  It promotes and encourage active learning through the Active 30 scheme, its Forest School outdoor learning opportunities, active maths, and active planned playtimes. The Year 5/6 Sports Crew completed the Playmakers award which enabled them to lead a host of high quality activities including a Greatest Showman-themed sports day and Butterwick Hospice’s Reindeer Run.

Sports Club of the Year

Laszlo’s fencing club is an inclusive environment that caters for everyone from international level to complete beginners.  It runs junior, senior and wheelchair sessions and supports all members to achieve at the highest level.  More than 25 volunteers from the club helped with the junior and cadet Commonwealth Championships, a major week-long event in July, featuring fencers from all over the world.  Without these volunteers, North East Fencing would have struggled to host the event.

Junior Sports Club of the Year

This has proved to be another highly successful year for Cinders, reflected in a record entry of 12 teams within the local junior netball league.  Results were incredible with victories at Minis and U12 levels followed with runner – up positions in other age groups.  Club attendance has increased with 90 plus regularly attending training sessions.  A record number of 17 players (U11 plus) were nominated at satellite and county level with 13 players successfully offered places for the forthcoming year, an amazing achievement.

Volunteer of the Year

Kath spends hours filling in grant application forms, liaising with the national Riding for the Disabled Association, visiting church groups and other organisations as a speaker to raise awareness and funds.  Every week dozens of disabled children and adults enjoy riding and carriage driving, using horses and specialist equipment which have been provided by the RDA group.  None of which would be possible without the dedication and hard work of Kath.

Young Volunteer of the Year

Kayla is a fantastic role model for every gymnast who walks through the door of Inspire Gymnastics Academy, she’s always one of the first to meet the new starters – showing them where to put their things and taking them under her wing throughout the warm up.  She’s first in to every session to help set up and usually one of the last to leave after helping to put everything away.

Sports Performance of the Year

Young Sports Performance of the Year

Ellen is a member of the Newcastle Swim Team, North East Disability Swim Club and Down Syndrome Swimming GB and is a very talented and driven young woman.  She is an S14 classification swimmer and also competes in para-swimming events, as well as national and international Down Syndrome swimming competitions.  In October of last year Ellen gained her first GB Cap at the Downs Syndrome Swimming Association European Championships gaining 7 golds and 1 silver.

John Ashworth arrived in Barnard Castle 42 years ago, the first part of his long playing career was primarily as an elegant upper order batsman and latterly, making a considerable mark as a wicketkeeper.  Hundreds and hundreds of cricketers from age 5 to 18 have had the benefit of his advice and wisdom.  Last year John introduced girl’s cricket with a successful satellite project with County Durham Sport, Durham Cricket Board and Teesdale School, along with ALLSTARS for the youngsters at Barnard Castle Cricket Club.