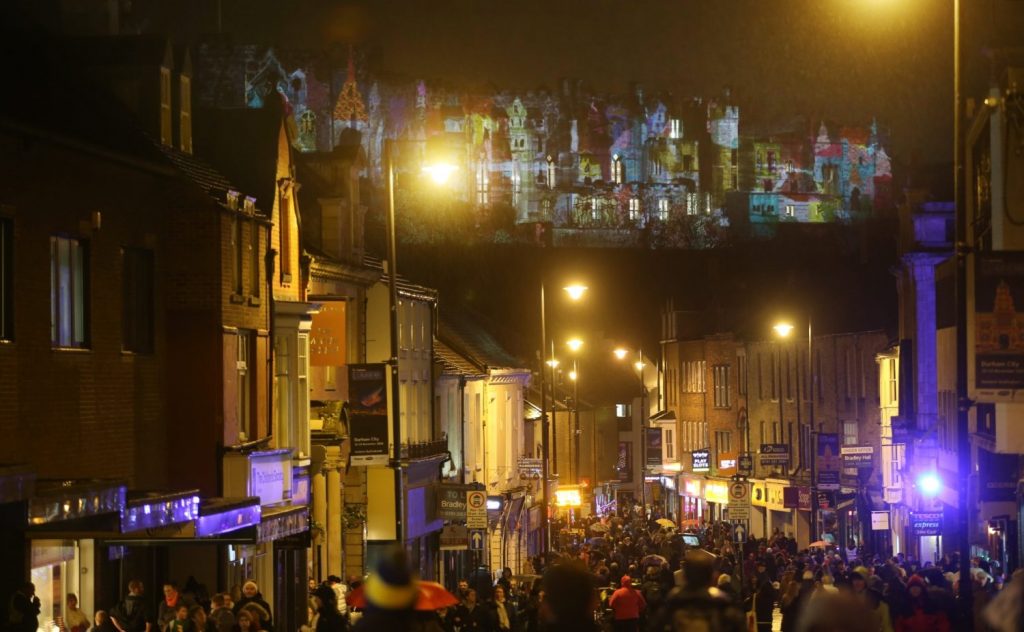 An event described by visitors as ‘majestic and mesmerising has delivered hugely increased financial benefits to County Durham and the North East.

Lumiere, the UK’s largest light festival, was staged in Durham for the fourth time last November. It instilled a sense of pride, made people smile and brought major economic growth for the region.

200,000 people turned out to see Durham City transformed by 29 artworks across four magical winter evenings. They encountered incredible artistic feats including a colossal whale in the Wear, the history of the universe projected onto the iconic Cathedral and the mysterious fog below the Castle.

Now an independent report into the impact of the event, which is produced by Artichoke and commissioned by Durham County Council, has concluded the festival, which has become synonymous with Durham, delivered a total economic impact of more than £9.6million. Whilst some of the increase could be linked to greater scrutiny of visitor spend – that’s nearly £4million more than the previous Lumiere in 2013.

As a result, next week the council’s Cabinet members will be asked to agree another £600,000 commissioning fee to bring Lumiere back for a fifth time next year. The fee would be raised from a mix of Performance Reward Grant and budget underspends. The remainder of the funds needed to stage the festival, which is estimated to need a total budget of £1.8million, will be provided by an Arts Council England grant, and raised by Artichoke through sponsorship, trusts and foundations and donations.

Leader of the council, Cllr Simon Henig, says Lumiere has a proven track record: “I am immensely proud of our partnership with Artichoke and of our relationship with what is without doubt a world class event.

“When we commissioned the 2015 festival, we did so based on sound economic impact which demonstrated a clear and significant return on our investment for the county, businesses and residents.

“It’s tremendous to see that this was translated into even greater benefits not just in financial terms but also by creating that ‘feel good factor’ which you can’t put a price on.

“More than 90 per cent of those surveyed rated Lumiere 2015 as ‘excellent’ or ‘very good’ and said it ‘made them happy’ with 80 per cent of visitors saying they planned to come back. These benefits are ongoing for us and we know that events like these allow us to showcase our offer on a world stage, attracting new business, creating jobs and boosting our visitor economy.

“Not many organisations can enjoy a return on investment of nearly 1,400 per cent and make people happy at the same time.”

Supported by more than 80 partners and funders including Arts Council England, Durham University and Durham Cathedral, Lumiere is the UK’s largest light festival with a growing international profile.

The independent evaluation, undertaken by the Policy Research Group at St Chad’s College (Durham University), also reflected the success of the interactive aspects of the art, the links to local history and heritage and the sense of pride and place the event inspired.

The council’s festival maker programme, which saw 190 volunteers take to the streets to help visitors make the most of the experience, was also valued by visitors. The help and advice as well as a friendly welcoming face were seen as very beneficial.

The evaluation reports that the outreach programme was ‘notably strong’, involving 860 children and young people and 525 residents from right across the county via the council’s Area Action Partnerships. The extensive programme saw Artichoke’s artists work with people of all ages and backgrounds to inspire and create.

Lumiere 2015 also featured an internationally recognised conference,. ‘Life, Art, The Universe, and Everything’, which attracted delegates from around the world and offered another opportunity to raise the profile of Durham’s cultural offer. In 2017 there is the chance to develop this further with the prospect of hosting the LUCI (Lighting Urban Community International) Conference alongside the festival.

Cabinet members will be asked to agree the £600,000 commissioning fee and a further £100,000 in kind support for a festival in November 2017, when they meet at Crook Civic Centre on June 15.