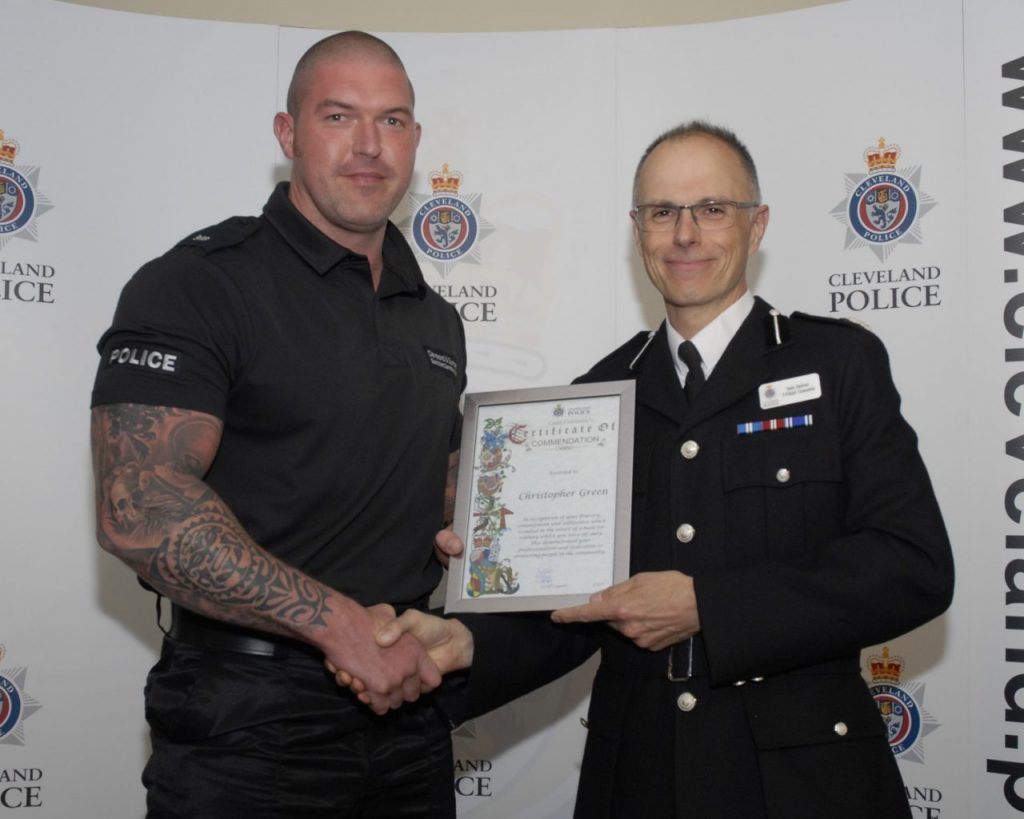 An off-duty police officer, who apprehended a robber whilst out for a meal with his wife, has been honoured at a police award ceremony.

Police Constable Chris Green was in Norton, County Durham, when he noticed a man trying to steal a woman’s handbag outside the restaurant he was dining in. He ran out of the restaurant and chased the robber who was violent and abusive, and was able to restrain him until his colleagues arrived.

Chris said: “My job is to protect people and my instinct at the time of the incident was to help the lady in danger. I am happy to have received the award and to have taken another criminal off the streets to prevent further crime from happening.”

The awards ceremony was held at Cleveland Police Headquarters on Ladgate Lane in Middlesbrough yesterday, Wednesday 25th May 2016.

Others awarded included a team of detectives, sergeants, inspectors and staff from the Corporate Communications Team after they were involved in a critical incident where they had to locate a high risk missing 14-year-old girl.

The teenager had been in contact with someone from out of the force area via the internet and officers and staff had to work collectively and quickly with each other as well as partner agencies, other forces and the media to locate the girl as quickly as possible.

The girl was located within twelve hours of being reported missing.

Temporary Chief Constable Iain Spittal said: “These awards recognise the level of team work, dedication to duty and determination of individuals to keep the public safe.

“Each person who has received an award has shown outstanding bravery and has gone above and beyond to protect people and I am extremely proud of each and every one of them for their hard work and utmost professionalism.”

Police and Crime Commissioner for Cleveland, Barry Coppinger said: “It is very important to recognise those who make a remarkable and often unseen contribution to the police service.

“I am confident that members of the public will also be proud of their achievements as they have delivered a fantastic service to our local communities.”