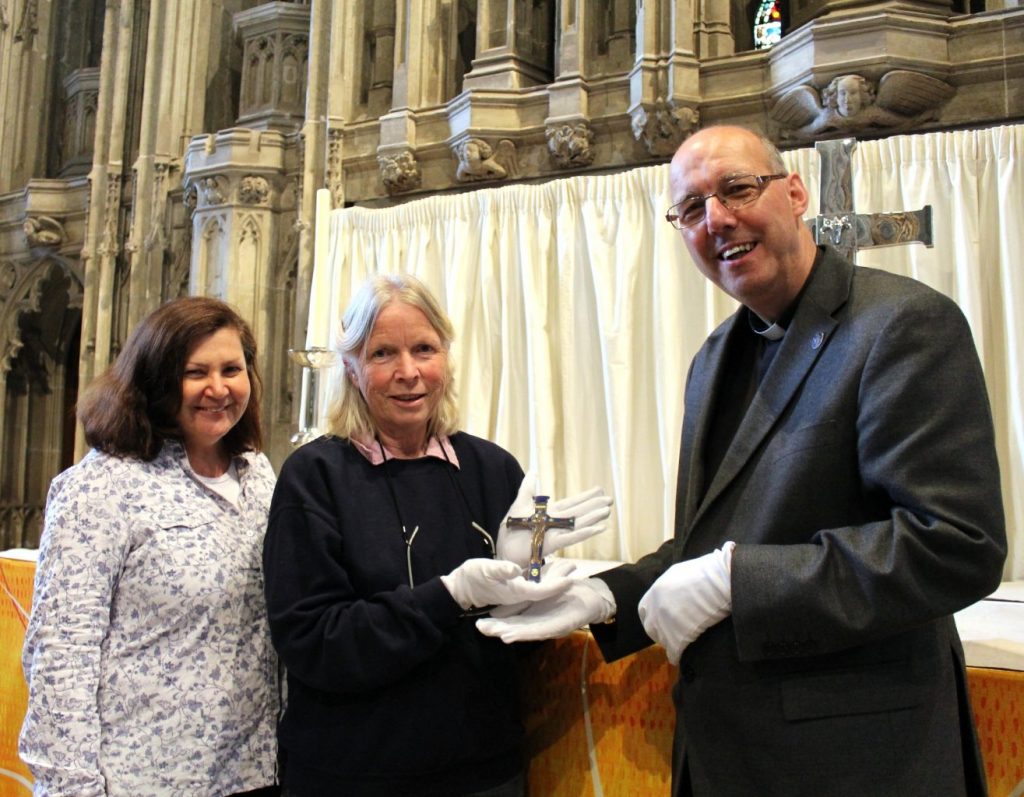 A crucifix found on the site of the Battle of Neville’s Cross has been donated to Durham Cathedral to feature in a metal-work display as part of the Open Treasure exhibition experience, when it opens on Saturday 23 July.

The crucifix was found between 1829 and 1868 in the grounds of Western Lodge, a house on the outskirts of Durham and known to be on the site of the Battle of Neville’s Cross.

Over time it has been handed down through family generations and has now been gifted to the Cathedral by Mrs Patricia Alvis from Bideford in North Devon. She said: “The cross was given to my late husband’s grandmother and subsequently passed on. It has been used on several occasions in our 800 year old church of St Swithuns, where my husband was the church warden for over 25 years but I am now 95 and was keen to give the cross a new home, I know it would have drawn interest from national institutions but felt that it would be apt to offer it to Durham Cathedral.

“I shall greatly miss this most precious object but I hope that it will be treasured with the Cathedral’s other relics in the Open Treasure exhibition.”
It is understood that the cross is made of copper and decorated with Limoges Champleve Enamel and that it was a portable altar cross, most likely used on a small altar for troops to take communion before or after battle.

Durham Cathedral’s Head of Collections, Lisa di Tommaso, said: “We are immensely grateful to Mrs Alvis and honoured that she has chosen to entrust this family heirloom to the Cathedral.

“As a piece that would have been used in battlefield prayer, it demonstrates just what an important role Christian faith played for soldiers during the likes of the Battle of Neville’s Cross in 1346 and we are delighted that it will be able to go on display as part of Open Treasure.”

Visitors will be able to see the cross; featured alongside many of the Cathedral’s other examples of sacred metal work, in the Great Kitchen, one of the impressive spaces awaiting visitors to Open Treasure, when it opens on Saturday 23 July. Open Treasure tells the history of Durham Cathedral and the story of Christianity in the North East, through a rolling programme of the Cathedral’s own collections and those on loan from other institutions as well as state-of-the-art interactive installations. The route will take in the 14th Century Monks’ Dormitory with its oak-beamed ceiling, the largest of its kind outside of Westminster, newly created gallery spaces and the fantastic vaulted, octagonal Great Kitchen, one of only two surviving monastic kitchens in the UK.