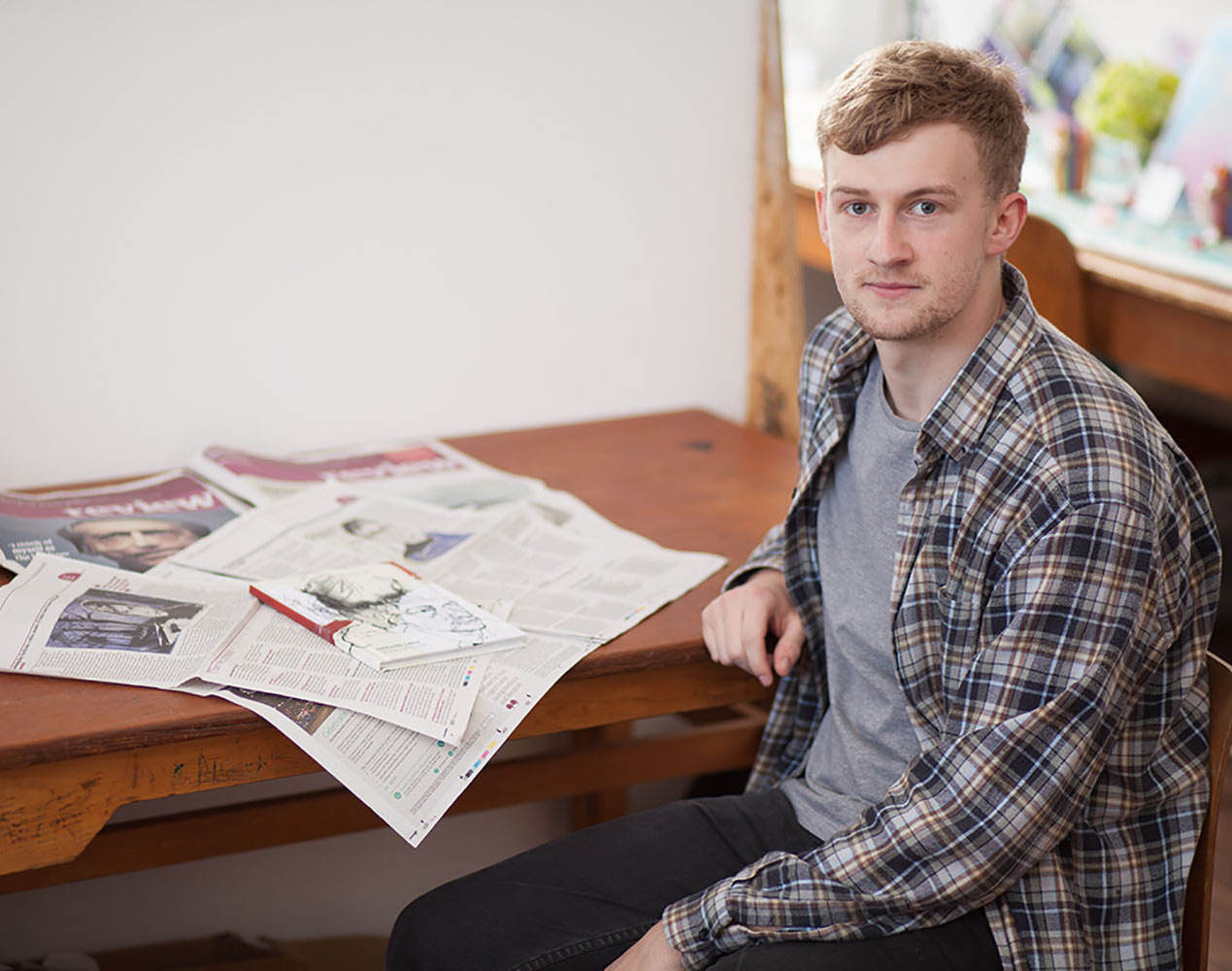 An illustration student from specialist art and design college, Cleveland College of Art and Design (CCAD), has already made his mark in the industry, having been commissioned for a weekly column in one of the UK’s leading national newspapers, The Guardian.

22-year-old Alan Vest from Eaglescliffe in Stockton-on-Tees, is currently on his final year of his Illustration for Commercial Application degree at the university-level campus in Hartlepool, and has been commissioned by The Guardian to produce illustrations for the newspaper’s new weekly column, ‘My Writing Day’. The column looks at various writers and authors, talking about their typical writing day and featured in a weekly column every Saturday.

Alan successfully secured the work after contacting the newspaper as part of his ‘Professional Practice’ module, as he explains: “We were set the task of making a telephone call to industry. Editorial illustration is an area I have become very interested in and I decided to call up The Guardian newspaper. Afterwards I contacted the art directors via email and sent through a few examples of my illustrations. I was very pleased when I received positive feedback on my work. They told me about an upcoming project and asked me to illustrate a couple of authors as a test run, so I produced a variety of illustrations in the hope of getting involved in the project.

“When I found out that The Guardian wanted me to commission me for a new a weekly column I was so happy, nervous but most of all excited to be recognised. Everyone in the CCAD studio was so happy for me, and my family were delighted about getting such an amazing opportunity. I’m so grateful to be given the chance to draw for such a prestigious newspaper. I intend to put all my effort into each illustration to produce the highest quality work I can, and continue to develop a professional relationship with the client.” To create the illustrations, which include famous writers such as Ian Rankin, Hillary Mantel and William Boyd, Alan is given a copy of the column text, which he reads to identify particularly interesting areas or highlights. After researching the author and sketching a number of ideas, Alan works on the concepts, producing a minimum of three roughs for the director to choose and he then creates the final artwork.

Alan will be graduating next month and is currently putting the final preparations to his final major project as part of the 2016 Vision Graduate Show at the specialist art college, which starts on Friday 3rd June from 10am at the campus on Church Square and runs until 11 June. The show will then be exhibiting as part of ‘Illustrated 2016’ at the Old Truman Brewery on Brick Lane in London from 8-10 June.

Alan said: “For my final major project I have tackled the subject of my late father’s mental health problems, by illustrating his poetry, and producing a book as the final outcome. The book contains a selection of poetry which my father wrote as a form of therapy, and my illustrations are an interpretation of his words. I think the self-published book offers a different perspective, looking at how mental health effects not only those inflicted, but the family and friends who love that person.”

He added: “I am so excited for the degree show in London this year, showing my illustrations as a part of ‘Illustrated 2016’, in the Truman Brewery is such an amazing opportunity. I think I’m nervous, but my excitement for the show this summer completely takes my mind of the nerves!”

After graduation, Alan will continue his work with The Guardian and is planning to get a studio with a few friends from the course, and work on his freelance illustration. He is also getting married later this year to a previous graduate of CCAD, which he says will be “pretty amazing”.

Ben Clowes, Programme Leader, BA (Hons) Illustration for Commercial Application, said: “Alan deserves gaining this commission as he has taken on every task and opportunity we have put to our graduating year. As other students in his cohort are now getting feedback from industry, having plucked up the courage to make a telephone call, I expect further success stories soon.”