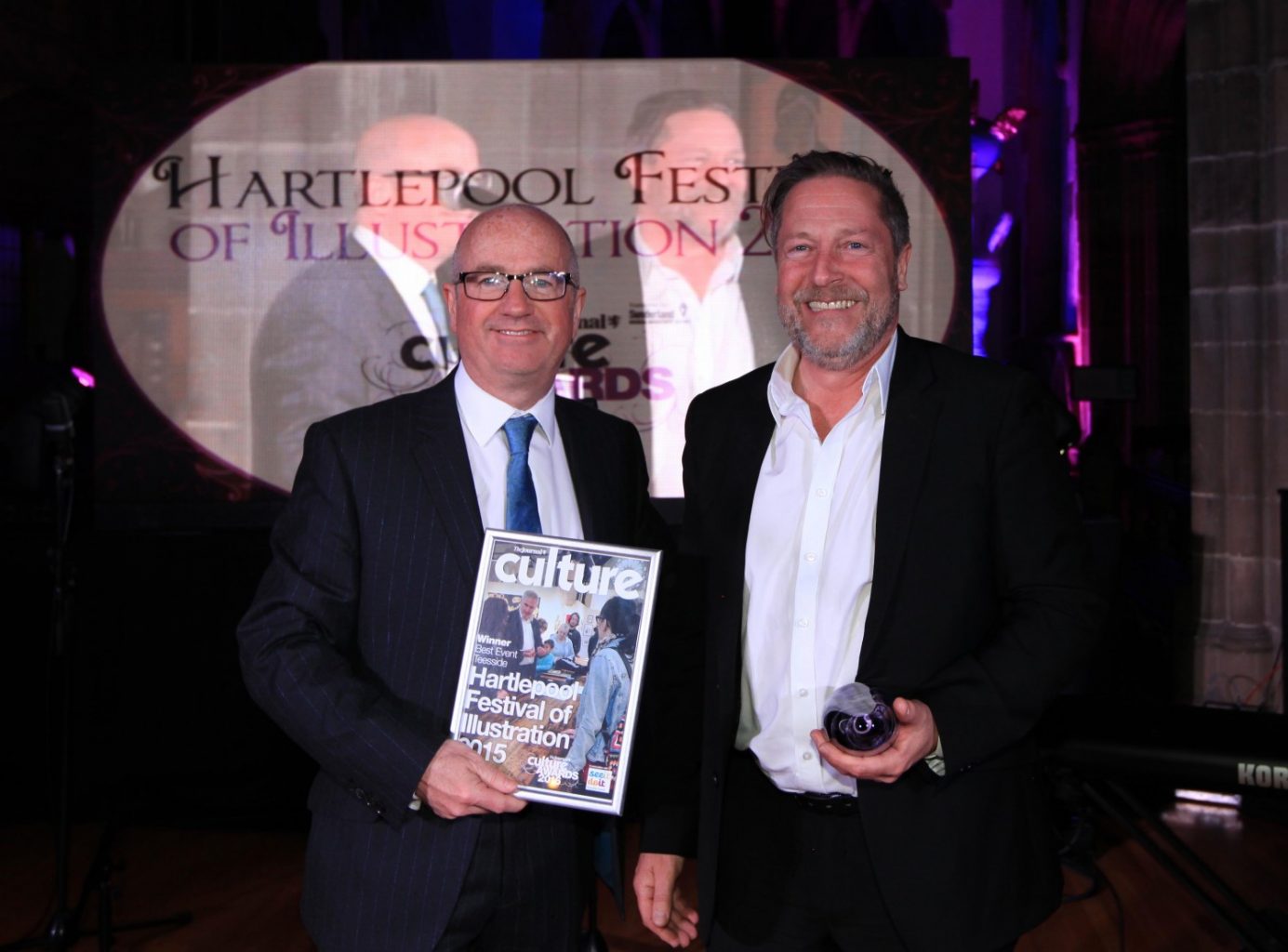 A festival which celebrated the illustrative arts has been recognised by the cream of the creative industry across the north east at a prestigious awards ceremony in Sunderland Minster.

Hartlepool Festival of Illustration, hosted by Cleveland College of Art and Design (CCAD), and sponsored by Grand Central Trains, made its debut last summer in Hartlepool, and has been awarded Best Event Teesside at The Journal Culture Awards 2016.

The 10th annual Culture Awards event, which rewarded the creative talents of the north east, was attended by an audience from the cultural and creative sector. As the awards were open to large and small scale events, festivals and exhibitions within Teesside, the Festival faced tough competition, and was shortlisted alongside Stockton Calling Music Festival and Teesside University’s MIMA: Localism art project.

Hartlepool Festival of Illustration presented a month-long event for children, families and illustration fans young and old – with world-renowned artists featuring an exhibition of major illustrators’ work – including Children’s Laureate, Chris Riddell, and Ralph Steadman. It attracted 8,300 visitors and included a series of illustration workshops in schools and libraries for over 800 children, two days of guest lectures and masterclasses and a street market of illustrators’ artwork.

Over 40 exhibitors, including Tom Newell, Dan Mumford, Keith Robson, Hunt Emerson and John McCrea, showcased over 250 works of art from as far back as the 1950s, some of which were original pieces which had never been viewed by the public before.

With a thought-provoking symposium which examined illustration through the ages, a live ‘drawing wall’ for visitors to take part in, and a lively street market, the inaugural event proved to be a massive success, and the team behind the event were delighted to win the award.

Patrick Chapman, Head of Employability and External Relations at CCAD, said: “We are delighted that the 2015 Hartlepool Festival of Illustration has won the Best Event Teesside award. Organising this first festival was a risk and a challenging task but we were driven by the vision to bring a diverse, world class set of artists and their work to Hartlepool.

“We wanted to connect with a wide audience spanning the whole community and show them how illustration is a part of daily life, to demonstrate to young people the many different careers that are open to them, and for everyone to have fun! We achieved all this so it is great to get recognition for the College and our partners, especially Hartlepool Borough Council.”

Ben Clowes, Programme Leader for CCAD’s BA (Hons) Illustration for Commercial Application Course, said: “We started to create an early buzz about the Festival by setting up a free drop-in comic illustration studio in Hartlepool’s Middleton Grange Shopping Centre, which drew in hundreds of children and converted people who had never visited the art gallery into symposium and masterclass attendees.

“In an area with traditionally low levels of engagement with the arts, we wanted to use a popular art form and demonstrate its range and depth. Over 8,000 people from all ages saw comics, movie storyboards, children’s books, product designs and advertising for companies such as Disney and Fiat, and also met the artists. It was a fantastic first event, reaching more than 19,000 people. We were kindly sponsored by Grand Central Trains which was a massive boost to the event, and we hope to build on that relationship next year.”

Councillor Kevin Cranney, Chair of Hartlepool Borough Council’s Regeneration Services Committee, said: “The Culture and Information Service of Hartlepool Borough Council is greatly honoured to be recognised with this award in conjunction with Cleveland College of Art and Design. It demonstrates the value of partnership working in creating cultural opportunities in the town. We look forward to building on this joint working over the next few years, particularly with the exciting Church Street and Church Square developments.”

As a member of the Tees Valley Culture Group, which launched its ambition to be City of Culture in 2025 last year, the College plans to further develop the cultural offering in the north east by running the Festival of Illustration as a biennial event, and expand its reach across the Tees Valley.

CCAD is also working with Hartlepool Council to support the creation of a creative and cultural quarter in the area around the campus, with additional £9.3m studios and teaching spaces opening in 2017 and plans for a creative enterprise centre with more than 30 studios and workspaces.

Hartlepool Festival of Illustration was hosted by Cleveland College of Art and Design, in collaboration with Hartlepool Borough Council and Seven Stories. The Festival was made possible through the generous financial support of Arts Council England and its Lottery Funded Grants for the Arts programme, and the Sir James Knott Trust, with additional support from Grand Central Trains, Middleton Grange Shopping Centre, Seawhite, Nobrow Press, The Book Sniffer and the Cartoon Museum.