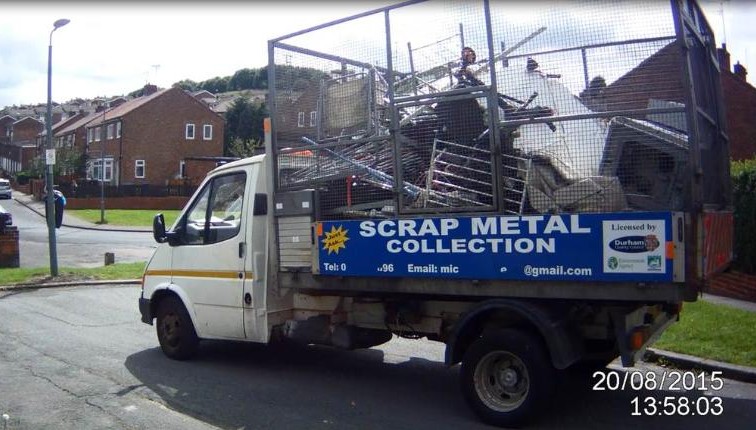 Unlawfully displaying council and Environment Agency logos on their van has left two unlicensed scrap dealers more than £600 worse off.

Liam Gallagher and Andrew Fradgley collected scrap in a van bearing Durham County Council, Hartlepool Borough Council and the Environment Agency logos, proclaiming they were licensed by all three.

However, the men were not licensed and now have criminal records and fines of £648.46 to pay as a result.

Peterlee magistrates on Friday heard how our neighbourhood warden came across a Ford Transit van in the Beaumont Crescent area of Horden in August last year.

The vehicle was loaded with waste – predominantly scrap metal.

The vehicle was empty but Fradgley, 32, of Bruce Kirkup Road, Horden, was nearby and told the warden it was being driven by his business partner Gallagher, 31, of Ravensworth Crescent, Hartlepool, who arrived at the scene, confirmed he was the driver and that he was collecting scrap.

Both men maintained that their use of the logos was above board.

Enquiries revealed, however, that neither Fradgley nor Gallagher held, or had ever held, licences under the Scrap Metal Dealers Act 2013.

Neither man was registered as a waste carrier with the Environment Agency.

Joanne Waller, Durham County Council’s head of consumer protection, said: “All scrap metal dealers must be licensed and should not tell customers they are if they are not.

“Gallagher and Fradgley are counting the cost of flouting the rules and this case should serve as a warning that we will take action to uphold them.”