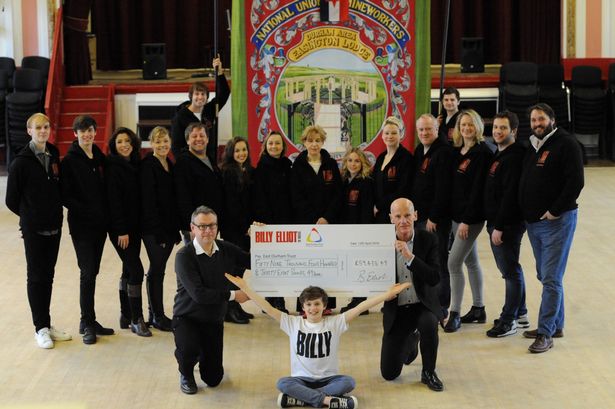 The community which inspired the classical tale of Billy Elliot has been handed a cash windfall of almost £60,000.

Audiences in London’s West End have raised the enormous cash sum for The East Durham Trust.

Newcastle writer Lee Hall, who wrote the film and multi-award-winning musical, was joined by director Stephen Daldry and members of the touring cast, currently performing Billy Elliot to sell-out crowds in Sunderland, for a presentation to the East Durham Trust.

Lee and the cast presented a cheque for £59,438 to Malcolm Fallow, Chief Executive Officer of the Trust which supports vital work and projects across East Durham.

The donation was partly made up of the proceeds of all tickets sold for the final performance of Billy Elliot the Musical in London on Saturday.

Billy Elliot the Musical is at Sunderland’s Empire Theatre throughout April.